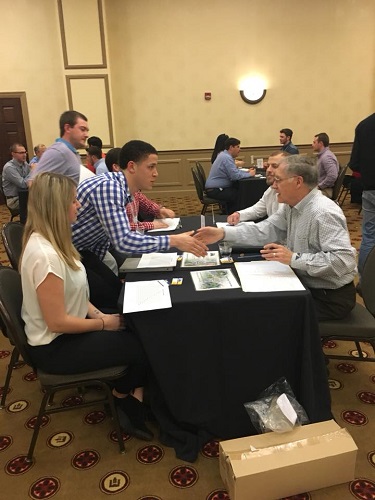 Forty-four students, primarily juniors and seniors, and twenty-six representatives for the Industrial Partners gathered at the Alumni Center on Feb 27, 2018 for the first ever Industrial Partnership Speed Networking Event.  This event, an adaptation of speed dating, was designed to provide space and time for students to connect with a variety of engineering professionals.  For the first half of the event, IP representatives remained stationary whiles students, who were given rotation charts, changed seats every five minutes.  The event’s second half gave students and IP representatives a chance to mingle freely and continue their earlier conversations.

Ms. Fogle, the event organizer, kicked off discussion by asking IP representatives to introduce themselves to the crowd.  There were some nerves but all the representatives were enthusiastic and appreciative to see familiar faces from the previous week’s Career Fair.  As rotations got under way, participants became more comfortable and a pleasant chatter filled the room.

The structure of the event forced students to speak with professionals more than traditional or self-guided networking and provided a less-formal and more comfortable atmosphere.  Both students and IP representatives were engaging in real conversations:  everyone was smiling, gesturing, and leaning in to hear one another talk.  Many participants even lingered at the end of each 5-minute rotation, wanting to hear or say just a bit more.

After forty-five minutes, about fourteen rotations, the group broke out to get drinks and hors d’oeuvres and continue their conversations at length.  Students were pleased with the event and reported that they learned a lot about industry, job and internship opportunities, and networking.

Krisha Dodeja, a junior actively looking for internships, stated that this event helped him set realistic expectations about the job market and job responsibilities.  Quader Aldarawish made a new connection by talking with Jeremy Jenkins from the Center for Career and Professional Development.  Clayton Phelps enjoyed speaking with a variety of companies and was encouraged by the number that participated.

As participants filtered out at the end of the evening, they were given specially designed T-shirts to mark their participation in the event, but they left with new and stronger professional connections, better expectations, and confidence.