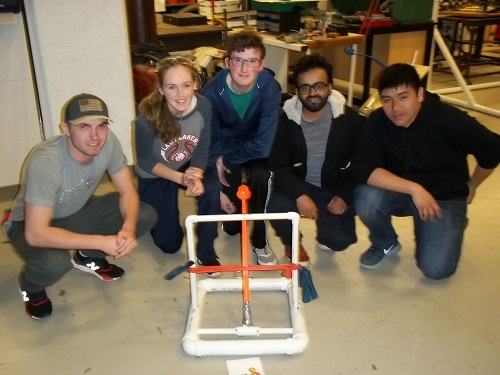 Just before WKU's Spring Break, more than seventy students gathered in the Integrated Applications Laboratory to complete their final exam for ME167.  These students have been working hard for the last two weeks to prototype, build, and adjust their teams’ tennis ball cannons.

Students milled around the room, talking about their projects and plans for the upcoming spring break as Dr. Schmultz completed the preliminary measurements:  cannons were weighed in a measured up.  Dr.  Schmultz also took photographs of teams and the culmination of their hard work.  Meanwhile, conversations buzzed with anticipation and excitement.

Launches began at about 7:00 p.m. and other teams gathered around to watch their classmates compete.  At one point, the sound of a metal piece hitting the floor made the crowd hush.  However, the competing team thought on their feet, quickly recovered, and continued the launch.

Ultimately, Team Gear won the contest with their orange catapult pictured below.