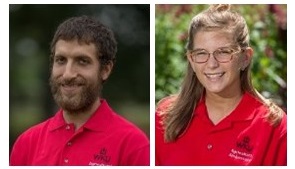 Two WKU Agriculture students are recipients of scholarships awarded by The Garden Club of Kentucky, Inc. for the 2018-2019 academic year.

Max Goldstein, a junior from Louisville, KY is majoring in both Agriculture and Nutrition/Dietetics.  He is president of the WKU Horticulture Club, an Agriculture Department Student Ambassador, and serves as vice-president of WKU’s chapter of Phi Upsilon Omicron, a national honor society in family and consumer sciences.  In preparation for graduation, Goldstein is applying to an internship program in Seattle, WA to become a registered dietitian and for a Fulbright Scholarship to study agriculture and Arabic abroad. His long-term aspirations are farm-to-table education including the benefits of eating locally sourced and sustainably grown foods and their effects on human health.

Dixie Major is working toward a double major in Agriculture (with an emphasis in Horticulture) and Spanish, and a minor in Teaching English as a Second Language.  From Hickman, KY, she has earned the distinction of being on the President’s List each of her semesters at WKU.  Major is involved in leadership of the WKU Horticulture Club.

Applicants for this competitive award must be a resident of Kentucky majoring in an accredited horticulture-related program at a Kentucky university.  Goldstein and Major will be honored at a luncheon in April at The Garden Club of Kentucky, Inc.’s state meeting in Berea, KY.

WKU is a 2020 Kentucky Academy of Science (KAS) Enhanced Affiliate and faculty, staff and students may join KAS for free.