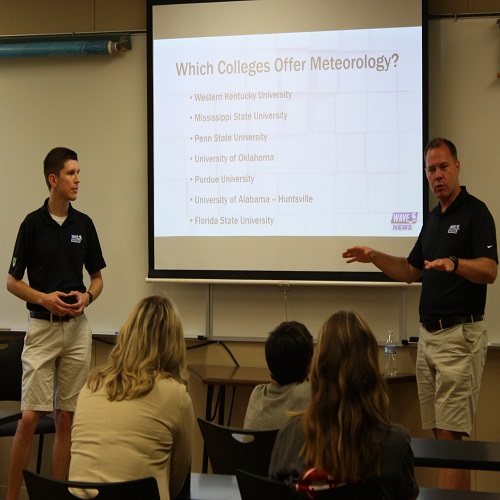 The WKU Meteorology Program is hosting more than 20 students from 10 states and Puerto Rico this week (July 17-21) for its fifth annual weather camp.

Since 2013, the WKU Meteorology Program has offered a summer weather camp for children ages 12-16. The camp focuses on exposing the importance of science and understanding of meteorology and allowing the children to participate in a variety of hands-on learning activities. Participants from Kentucky, Alabama, Indiana, Tennessee, Missouri, Illinois, Ohio, Maryland, North Carolina, Virginia and Puerto Rico are attending this week’s camp.

“Many people are fascinated with the weather. It’s the number one topic of conversation among strangers for a reason,” said Dr. Josh Durkee, Associate Professor of Meteorology & Climate Science Research. “That reason is because the weather affects each and everyone one of us every single day. We are used to it most of the time, but curiously puzzled by it at others. And that curiosity starts at a young age.”

Weather campers will get to sit at the high-end customized computers that students in the WKU Meteorology Program learn on. This means campers get access to advanced weather radar software and other sophisticated modeling and analysis tools. Participants will learn about the importance of weather stations and observation by visiting and interpreting WKU weather data provided by White Squirrel Weather.

While the WKU Weather Camp operates primarily out of the Meteorology Program’s learning laboratory, the group has other activities planned including participating with the National Weather Service in Nashville to help release weather balloons, visiting WBKO to practice broadcast meteorology, visiting Mammoth Cave to learn about the weather beneath us and taking in a Bowling Green Hot Rods game.

In the end, WKU Weather Camp participants will be able to apply their new knowledge and experiences of meteorology by presenting detailed forecasts to the group.

“Meteorology is an important science that receives very little learning time in pre-college general education,” Dr. Durkee said. “The WKU Weather Camp is intended to provide a fun, but important learning supplement to students wanting to learn more about this ever increasingly popular field of science. I would love to see these campers return to WKU to obtain a degree in Meteorology from our wonderful program.”