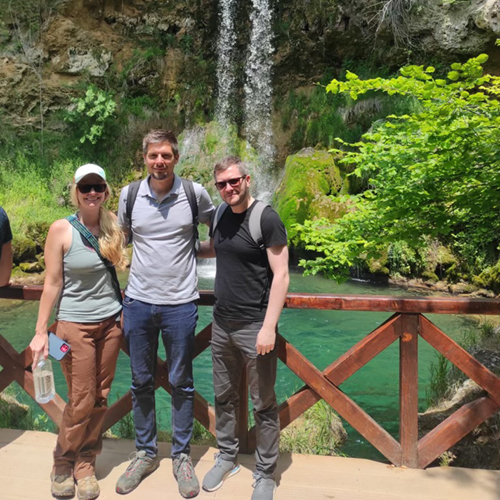 This June, Crawford Hydrology Lab (CHL) manager, Autumn Singer, traveled to the Balkans region of eastern Europe to complete a cultural and scientific exchange funded by the Trust for Mutual Understanding (TMU), an organization that offers grants to encourage and support interactions between American and eastern European scientists. CHL Assistant Director, Lee Anne Bledsoe, and Dr. Nenad Marić with the Department of Ecological Engineering at University of Belgrade and the Cave Research Foundation were awarded TMU funding for their proposal “Research Scholar Exchange in Groundwater Studies” in 2019. The US-based portion of the exchange took place that same year with Dr. Marić traveling to Kentucky to receive training in cave survey and mapping, fluorescent dye tracing techniques, and hydrologic monitoring methods used in the urban and rural karst environments of southcentral Kentucky. Singer was scheduled to complete the exchange in the summer of 2020 with plans to travel to the Balkans and attend the Hydrogeology International Course and Field Seminar held in Trebinje, Bosnia and Herzegovina or a similar groundwater training/research event in coordination with Dr. Marić to focus on contaminant transport and remediation in karst areas. Unfortunately, the COVID-19 pandemic delayed those plans.

Fast-forward to June 2022 when Singer traveled to Belgrade, Serbia to meet with Dr. Marić and his Centre for Karst Hydrogeology (CKH) colleagues at the University of Belgrade. There, she presented “Fluorescent Dye Tracing: Applied Methods in Hydrogeology” to the faculty of Geology and Mining, Department of Hydrogeology at the University of Belgrade. Attendees received information about fluorescent dye tracing techniques using activated charcoal media for passive monitoring in karst systems and were given several case study examples demonstrating these and other novel techniques CHL is using for groundwater monitoring, such as environmental DNA (eDNA) tracking and Microbial Source Tracking (MST).

During her visit, Singer also discovered Belgrade’s rich and turbulent history, extending back to pre-historic times. Multiple conquests from neighboring counties have sought to control and defend the city’s strategic fortress at the confluence of the Danube and Sava Rivers. Serbian-American connections and contributions are also plentiful. Prominent examples include Jovan Cvijić, Serbian geographer who is credited as the first to describe the soluble bedrock and its associated caves, springs, and other features common to the Dinaric region as “karst,” a word that is quite familiar to those living in southcentral Kentucky, as it has its own karst.  Another recognizable figure is the Serbian engineer and inventor Nikola Tesla, known for many contributions including the design of alternating current electricity systems. A visit to the Nikola Tesla Museum in Belgrade revealed details about the life of Tesla, his time in America, his major accomplishments, and displays of several functional motors and Tesla coils. As the week ended, Singer and Dr. Marić joined a group of hydrogeologists from the CKH on a tour of karst springs and ancient monasteries high in the hills of the eastern Serbian countryside learning of historic and modern human use in the area, with access to natural water sources being a need that still links the active monasteries to the surrounding rural communities. The team visited Krupaj Springs, a unique location where a large karst spring is situated only a few hundred feet from a large geothermal spring. The karst spring serves as a drinking water supply for the surrounding communities, and a trout rearing facility exists in the cool waters below the dam.

The final phase of the exchange took place in Postojna, Slovenia where Singer attended and presented outcomes of the TMU exchange at the 29th International Karstological School. Each year, the Karst Research Institute ZRC SAZU hosts this conference which features professional talks, poster presentations, and field excursions to karst features in the heart of the famous Dinaric karst region. There, Singer presented the poster “Enhancing Scholarship in Karst Hydrogeology through Cultural Exchange” to spread awareness among other researchers of the funding opportunities available to support scientific exchanges between US and Eastern European countries.  Her participation also included field expeditions to world famous Postojnska jama and UNESCO World Heritage Site and International Biosphere Reserve, Škocjanske jame. Both caves are known for their exquisite prevalence of formations, presence of unique, cave-adapted organisms, and are places of great cultural importance in preserving the evidence of first explorers dating to pre-historic times.

The exchange has resulted in several positive outcomes, including the award of a Fulbright Visiting Scholar Award to Dr. Marić for the proposal he developed with Dr. Jason Polk, Director of the Center for Human GeoEnvironmental Studies at WKU, during the US-based portion of the exchange. The results of the dye tracing efforts conducted with Dr. Marić in 2019 led to the hydrologic connection of Mammoth Cave Proper to Great Onyx Cave, identification of an endangered Kentucky Cave Shrimp in a new location in Mammoth Cave, and furthered efforts to better characterize the Great Onyx groundwater drainage basin. Together, these accomplishments have provided the basis to secure additional funding in support of continued research in the Great Onyx vicinity. The Balkans portion of the exchange was equally productive, providing opportunities to experience the culture of Serbia and Slovenia while being surrounded by a community of interdisciplinary scientists, working towards common goals in the cradle of karst geologic settings.  Interactions with Serbian karst hydrologists from the CKH allowed Singer to introduce novel sampling techniques for dye tracing that are commonly used in the US but are not widely used in Serbia. The opportunity to view and explore the Dinaric Karst, formed under processes unique from the karst of southcentral Kentucky, and observe that both regions face similar challenges to characterizing and protecting groundwater highlighted the need for more collaboration and communication of the different approaches to managing karst resources used among the international community. With approximately 20% of the world relying on karst groundwater as a drinking water source, the importance of applying multi-faceted approaches to groundwater study and management is increasing. Karst scientists must continue to learn from one another to achieve security for groundwater quality and availability.  An understanding of the successes and failures to managing karst groundwater in one geologic setting is a valuable point of reference that can be used to inform approaches that may be applicable in other settings.

An ever-growing sense of people and place was the thread that bound these experiences together.  Although the initial exchange has ended, interactions of CHL and Serbian colleagues are far from over. CHL and CKH continue to share contact on tracer studies, and Singer plans to attend the Characterization and Engineering of Karst Aquifers international course in Trebinje, Bosnia and Herzegovina in the summer of 2023 to continue the relationship. The exchange was made a success due in part to the Trust for Mutual Understanding, Cave Research Foundation, Mammoth Cave National Park, Dr. Rickard Toomey III, Dr. Chris Groves, National Speleological Society, University of Belgrade Faculty of Mining and Geology, University of Belgrade Centre for Karst Hydrogeology, and University of Belgrade Department of Hydrogeology.

For additional information or questions, please contact Autumn Singer at (270) 745-9224.