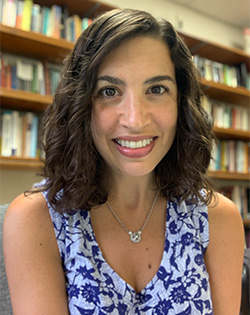 Ph.D. in English Literature from the University of Maryland, College Park, 2012.

M.A. in English Literature from the University of Maryland, College Park, 2003.

B.A. English Literature (with Honors) from the University of Michigan, 2001.

Gillian Knoll studies and teaches literature from early modern England, specializing in drama by Shakespeare and his contemporaries. Her focus, in the classroom and in her research, is on how language shapes and represents inner life in early modern texts. Currently she is working on a book that uses tools from cognitive linguistics to explore sensory and spatial metaphors that dramatize erotic desire in Renaissance plays. Her article, “How to Make Love to the Moon: The Erotics of Distance in John Lyly’s Endymion,” was published in the Summer 2014 issue of Shakespeare Quarterly. Dr. Knoll’s latest essay, “Binding the Void: The Erotics of Place in Antony and Cleopatra,” will appear in Criticism in 2016.

Before coming to WKU, Dr. Knoll taught courses on early modern literature, drama, and composition at the University of Maryland, where she received her Ph.D. in 2012. She spent two years as Director of Educational Mentoring at Thinking Organized, an educational coaching organization based in Washington, DC, which helps students develop strategies for organization and time management, as well as language and cognitive processing skills. Here at WKU, Dr. Knoll teaches courses on early modern literature and is co-sponsor of the English Club. She enjoys taking students to the theater, especially to see productions of Shakespeare’s plays.