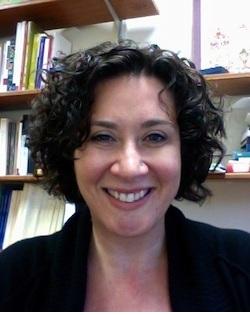 Dr. Langdon is the editor of Animal Languages in the Middle Ages: Representations of Interspecies Communication (Palgrave, 2018) and Postscript to the Middle Ages: Teaching Medieval Studies through Umberto Eco’s The Name of the Rose (Syracuse University Press, 2009). She has published articles in journals such as Medieval Feminist Forum, The Chaucer Review, Studies in Medieval and Renaissance Teaching, The Old English Newsletter, and Romance Notes. She has received grants to conduct research at the Huntington Library, the Library of Congress, and the British Library. Her current research projects center on the liminality of human/animal identity in the medieval imagination.

Alison (Ganze) Langdon hails originally from the San Francisco Bay Area. She earned Bachelor and Master of Arts degrees in English from Arizona State University and a PhD in medieval literature from the University of Oregon.  Before coming to WKU in 2007, she held a position as Assistant Professor of English at Valparaiso University in Indiana.  She is a member of the Medieval Academy, the New Chaucer Society, the Society of Medieval Feminist Scholars, and the Medieval Association of the Midwest, serving for the latter as a member of the Executive Council and as Convener of Conferences. In 2014 she was appointed co-editor of Enarratio, a journal of medieval studies. In addition to teaching at WKU she also serves as undergraduate literature advisor and as the managing editor of The Ashen Egg, the English department’s annual journal of analytical essays on literature, rhetoric, linguistics, film, and popular culture, which she founded in 2012.

Dr. Langdon’s teaching encompasses a wide range, from general education courses to specialized seminars in medieval literature.  Her goals as a teacher of English are fourfold: to cultivate students’ awareness of the power and beauty of language, to develop their intellectual awareness of being a part of the human experience while recognizing the diversity of that experience, to help them develop critical thinking skills and the ability to express their ideas clearly and effectively, and to foster independent learning. In 2015 Dr. Langdon was the recipient of the Potter College and Western Kentucky University teaching awards.