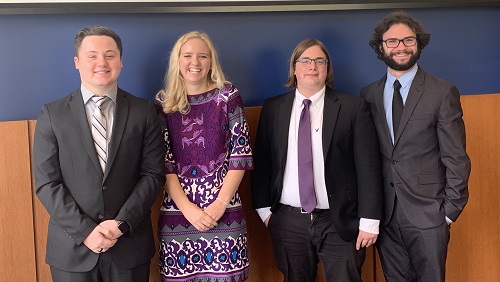 WKU students were recognized as presenting the “Best Proposal” during the Clay Summit on Kentucky Pensions, held October 19 on the University of Kentucky campus.

The goal of the Summit was to challenge students from across the Commonwealth to develop policy recommendations on pension reform. The Summit is sponsored by the Henry Clay Center for Statemanship, a nonprofit, nonpartisan organization desiring to change the nature of political discourse.

The WKU group collaborated with students from the University of Kentucky to explore the economic, budgetary, and political dynamics of the pension issue in the spirit of Henry Clay, who was known as the “Great Compromiser.”

“We were required to work with other groups to compromise and combine our proposals into cohesive arguments to help solve the pension crisis,” Crawford said.

"Working with students from another university was extremely rewarding," Rowlett said. "We all shared common interests, not only in regards to fixing the pension, but also in our academic studies, which allowed us to create a bond relatively quickly. Having different perspectives on what sort of policies we should implement brought creativity and innovation that we could not have come up with on our own."

Each group’s policy memo will soon be posted to the Henry Clay Center’s website: henryclaycenter.org. Crawford said he hopes that others read and consider their information as well.

“We hope that Frankfort will take a strong look at all of our recommendations,” said Crawford. “We hope that whoever wins this upcoming election will seriously consider the severity of this issue.”

The judges who reviewed the proposals included representatives from the League of Women Voters, AARP, the financial advising industry, and the state’s pension board.