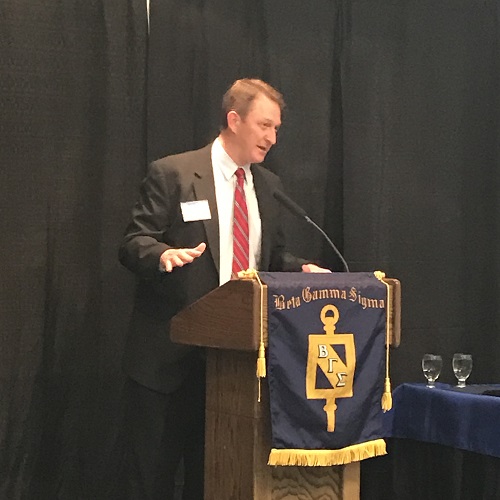 The WKU chapter of the Beta Gamma Sigma International Honor Society in business inducted 45 students, faculty, and business professionals during its annual ceremony on March 30.

These inductees join an expanding worldwide network of more than 625,000 business professionals who have earned recognition through lifetime membership in Beta Gamma Sigma. Students ranking in the top 10 percent of the baccalaureate and top 20 percent of graduate programs at schools accredited by AACSB International (The Association to Advance Collegiate Schools of Business) are eligible for this invitation.

Chapter Honoree for this year is Mr. Chad Davis, founder and owner of Red Rock Business Advisors in Washington, D.C. His advice for the audience is to “fail successfully by failing forward.”

Faculty Initiate is Ms. Stacey Gish, Instructor in the Department of Management and the Communication Coordinator of the Gordon Ford College of Business.

“As an applied college of business, we are particularly proud of outstanding academic excellence signified by Beta Gamma Sigma membership as our students prepare for leadership positions in business, government, and not-for-profit organizations,” said Dr. Jeffrey Katz, Dean of the Gordon Ford College of Business and Beta Gamma Sigma Chapter President.  “The high level of student engagement with Beta Gamma Sigma has earned our college the enviable recognition as a Premier chapter.”

The following students were inducted into Beta Gamma Sigma:

Beta Gamma Sigma was founded at the University of Wisconsin in 1913 as the first national honor society in business. WKU’s chapter was established in 1983.