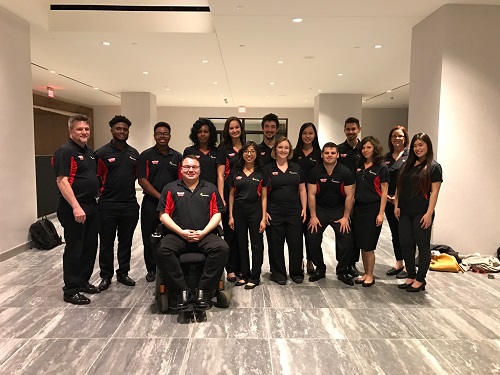 WKU’s ENACTUS team presented its five community engagement projects in regional competition in Atlanta on Friday, March 24, 2017.The ENACTUS team is sponsored by the Gordon Ford College of Business and the Center for Entrepreneurship and Innovation.

The competition, which included 18 institutions from across the South-Eastern Region, was divided into three leagues of six teams apiece. While the Team did not advance to the national competition in Kansas City, Team members received interviews from competition sponsors, including 12 from Sam’s Club and Wal-Mart. WKU students Aaron Woodlee and Bryan Nelson received Management-in-Training internship offers in Loveland, Ohio, and Bowling Green Sam’s Club locations.

The Job Bus, an initiative to find modes of transportation for those who cannot reach the 3,000 open jobs near downtown the Bowling Green;

Food Recovery Network, a project to reduce food waste and food hunger across WKU campus and the Bowling Green community by collecting food and distributing it through a network of local organizations;

Night Market, Bowling Green’s evening farmer's and craft market to be held March 31 at Stadium Park Plaza next to the Hot Rods Stadium from 5pm-9pm.

Mr. J. Krist Schell, Executive-in-Residence in the GFCB, and Dr. Evelyn Thrasher, professor in the Information Systems Department, served as faculty mentors for the team.

"I am very proud of our team's heard work preparing for regionals," said Ryan Purk, Chief Operations Officer for the ENACTUS team. "ENACTUS competitions are always inspiring opportunities to witness and learn from the unlimited possibilities for entrepreneurial action to improve the world around us."

WKU ENACTUS is part of the ENACTUS worldwide movement, solving local, regional, and global problems through the positive power of entrepreneurship.