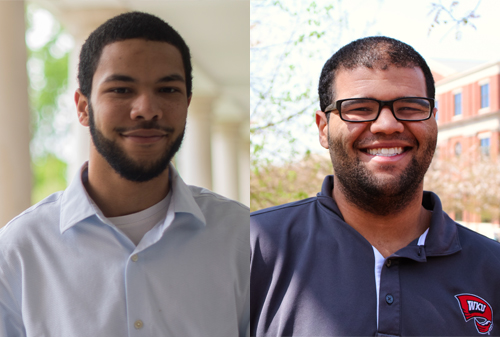 Two WKU juniors are among the 15 scholars selected nationwide for the Charles B. Rangel International Affairs Summer Enrichment Program. Hayden Grace of Hopkinsville and Deven Richardson of Bowling Green are the first WKU students to earn this honor. They are the only students from a Kentucky institution in the 2018 cohort.  Both are students in the Mahurin Honors College at WKU.

Funded by the U.S. Department of State, the Charles B. Rangel International Affairs Program attracts and prepares students for careers in international service.  Honoring Congressman Rangel’s global leadership, the program seeks to promote greater diversity and excellence in the U.S. foreign service through graduate fellowships and the six-week summer enrichment program.

Grace, a mathematical economics major, is the son of April Grace and Greg Cable.  He plans to combine his studies in economics and interest in global issues as an economics officer in the U.S. foreign service.

Richardson, a political science and international affairs major, is the son of Christy Richardson.  He plans to pursue a career in the U.S. foreign service that combines his studies at WKU and interest in Japanese language.

"The continuing success of WKU students in winning highly competitive and prestigious State Department internships and scholarships is a testament to the hard work of our students and the opportunities WKU affords them to develop their international skill sets,” Mr. Michael McClellan, diplomat-in-residence in the Office of International Programs at WKU, said. “As Deven and Hayden have shown, our students are uniquely qualified for diplomatic and public service careers, and the contributions their backgrounds and education gained from living and studying in Kentucky are highly valued."

Grace and Richardson have been previously recognized in national scholarship competitions.  Grace participated in the Fulbright U.K. Summer Institute at the University of Exeter where he studied climate change during summer 2017, and Richardson received a Benjamin A. Gilman International Scholarship to study at Kansai Gaidai University in Osaka, Japan for the spring 2017 semester.  Richardson was also selected for a U.S. Department of State Critical Language Scholarship to study Japanese during summer 2018 but declined that award to participate in the Rangel Summer Enrichment Program.

Both students worked with the Office of Scholar Development at WKU in preparing their scholarship applications.

“Hayden’s and Deven’s successes are celebratory moments for them and the university,” Cory Dodds, coordinator of nationally competitive opportunities in OSD, said.  “They sought out faculty mentors, academic rigor, and international experiences that have contributed to their accomplishments in national scholarship competitions.  They will make the Rangel program stronger as result of their participation.”