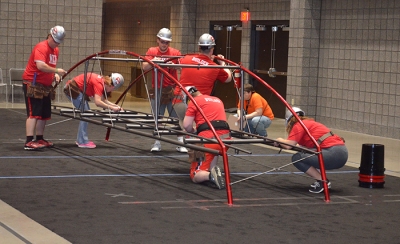 WKU’s steel bridge team qualified for the National Student Steel Bridge for the fourth consecutive year and will compete in the 2016 national event on May 27-28 at Brigham Young University.

In April, WKU finished third overall in the Ohio Valley Student Conference where the team placed first in display, second in construction speed and economy, and third in efficiency.

Steel bridge team members who will be traveling to the May 27-28 national competition are tri-captains James Thomason and Drake Riley of Bowling Green and Daniel Hammer of Tompkinsville; Caitlin Brown of Hartford; Colton Dorris of Clarksville, Tennessee; Lacey Martin of Glasgow; Sarah Hay of Louisa; Nathan Hughes of Bowling Green; and faculty advisor Shane Palmquist.

“This year the team wanted to build an elegant curved steel arch bridge and they did,” Palmquist said. “Their effort resulted in beautiful yet competitive design, and the team looks forward to going to the national competition.”