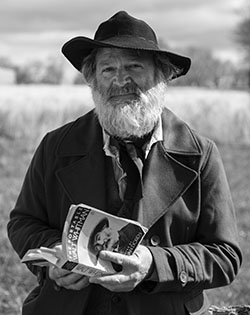 As a child, I spent many days running around in the woods and fields of home, fishing and frogging in farm ponds and in the various creeks of Barren Co., Kaintuck. Otherwise, I was likely playing baseball and basketball and going to church. In high school I played football and ran track, studied well enough, and earned minimum wage ($3.35 per hour!) hauling hay, harvesting tobacco, and mucking manure out of calf pens. I delivered Domino's pizzas a while and worked in the pressroom at the magazine factory right out of high school. I didn't intend to go to college but entered WKU in the fall of ‘88 because of lack of other plans.

After taking many classes in hotel and restaurant management with a business minor, I switched to the English major in the spring of 1991 because the humanities professor's "life of the mind" looked pretty attractive. I loved reading and was good at writing and could imagine myself teaching literary and rhetorical arts when I grew creaky in the bones. So, I earned the B.A. degree in literature and creative writing at WKU in (1993), followed by the M.A. (1995) and Ph.D. (2000) at the University of Mississippi. After teaching in northern Illinois for several years, I was hired on at WKU in 2005.

Now I dwell in north Warren Co. with wife Elisa and a lively collection of goats, chickens, dogs, cats, migratory Purple Martins, well-fed songbirds, and garden that gets bigger every year. The rivers Green and Barren thankfully flow nearby.