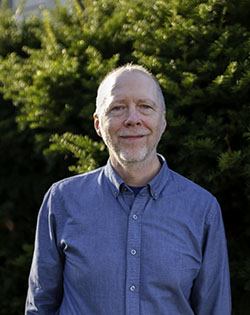 Dr. Hovet’s research interests are in early cinema, 19th century popular entertainment, and pedagogy.  He has published in several journals including The Quarterly Review of Film and Video; Pedagogy: Critical Approaches to Teaching Literature, Language, Composition and Culture; American Studies; Literary London, and 19: Interdisciplinary Studies in the Long Nineteenth Century.  He has received grants to conduct research at the Getty Museum, the British Film Institute, and the British Library

Ted Hovet earned his B.A. from Macalester College (1987) and his M.A. and PhD in English from Duke University (1990, 1995).  He has taught at WKU since 1995.  Shortly after arriving at WKU he worked with several colleagues in Potter College to develop a film studies minor, which began in 2000.  In 2010, thanks to coordinated efforts in English, the School of Journalism and Broadcasting, and Potter College, WKU now has a film major.  Dr. Hovet regularly teaches courses in the film minor/major, especially Film Theory, World Cinema, and History of Narrative Film.  He also teaches composition and Introduction to English Studies.

One of my greatest passions as a teacher and scholar is the world of early cinema.  During this period a film exhibitor would stitch together a program of short movies from a wide variety of choices, perhaps combining a serious adaptation of a literary classic with a "trick" film that made people and objects disappear in a smoky explosion.  The exhibitor would often stand beside the screen to enlighten and entertain the audience with a running commentary.  I find that early film exhibition serves as an inspiring metaphor for classroom teaching and for student learning.  The instructor must creatively combine a variety of materials from a number of different sources, presenting them to a class in a coherent and engaging “program.” In turn, the student must “exhibit” what he or she learns in the classroom by presenting this knowledge through writing, speaking, and other kinds of creative/intellectual work.

Though student “exhibitions” may begin in the classroom, I also direct students to engagement opportunities outside of the classroom, where student clubs and organizations, conferences, and publications provide a means to exhibit learning in new and challenging ways.