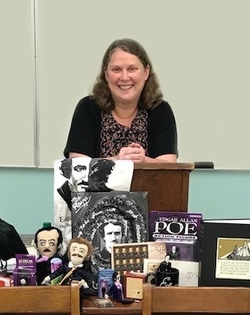 Sandra Hughes, a native of western Kentucky, earned her B.A. in English, Spanish, and psychology at Kentucky Wesleyan College.  After completing an M.A. in English at Marquette University in Milwaukee, she taught English for three years in Chiba, Japan.  Upon returning to the U.S., she obtained her Ph.D. in American literature from the University of Georgia, where she was also a Robert E. Park Postdoctoral Teaching Fellow.  For the past eight years, she has taught at WKU, where she won the Potter College and University Teaching Awards.  She has taken students on month-long study abroad trips to Japan in 2008 and Italy in 2011.  She has published work on Nathaniel Hawthorne, Edgar Allan Poe, Henry James, and Louisa May Alcott, and has delivered conference papers in Spain, Portugal, France, Greece, the U.K., and the U.S.  She co-founded the Faculty Social Organization at WKU, co-advises the English Club, and currently serves on the editorial board of The Edgar Allan Poe Review.  An avid traveler, she has visited 17 countries or territories, and hopes to add more soon.  Her Labrador retriever mix, Sophia Pawthorne, is the English Club mascot.

As a teacher of first-year writing, I all too often hear students say something like “I know I’m a terrible writer,” or “I'm just not good at English.”  If left unchallenged, such comments can become self-fulfilling prophecies.  Because I hold a firm belief that every student can do something well, I try to vary classroom activities so each student has a chance to realize his or her potential.  Some students contribute meaningfully to discussions, some write strong journal entries they can share with the class, others prove to be skillful at peer editing, and still others excel in class debates about current events.  I want my classroom to be a place where students cooperate rather than compete, so I ask students who are good at a certain task to help those who are having trouble, with the understanding that tutor-learner roles will shift based on the activity in which the class is engaged.

Teaching general education classes is an important part of an English Department faculty member's job since close reading, critical thinking, and effective writing are at the very heart of what we do in English.  I ask my general education students to do several types of writing for different purposes or groups of intended readers in order to enhance their awareness of their rhetorical situation.  Since I view writing as a process, I ask my students to prepare multiple drafts of each essay they submit.  Near the end of the semester, I require that they revise an earlier paper for a grade because I want them to realize that writing, like thinking, is never finished.

Whether I am teaching first-year writing, a literature survey, or a literary topics course for English majors or graduate students, I seek to communicate my enthusiasm for the material to the class and to encourage a high level of student involvement.  I see myself as responsible for creating a positive learning environment that makes students feel comfortable, yet intellectually challenged.  I want my students to question and analyze what they read, not to settle for a facile interpretation of the text.  Indeed, while I am dedicated to giving my students a detailed introduction to major periods and movements in American literature, I am less interested in teaching them a single, definitive interpretation of each text we study than in teaching them how to read and interpret literature for themselves.

I have spent over three years of my life teaching in Japan, most recently with KIIS in 2008.  As a teacher, I have learned a great deal from kyudo, or Japanese archery.  When novices begin to study kyudo, they are given neither a bow nor arrows.  They practice the proper form for drawing the bow with a flexible cord, sometimes for as long as a year, until they earn the teacher’s permission to proceed to the bow.  Then they learn the proper stance and balance for drawing the bow itself, still without an arrow.  Eventually, they proceed to firing arrows without trying to hit the target.  It is only after a great length of time that a student begins to aim at the center of the target.  Watching my Japanese high school students practice kyudo showed me the importance of patience, of process, and of high expectations.  I am deeply dedicated to the process of becoming a better teacher, of pushing myself and my students toward higher levels of achievement.  As Thoreau writes in Walden, “In the long run men hit only what they aim at.  Therefore, though they should fail immediately, they had better aim at something high.”