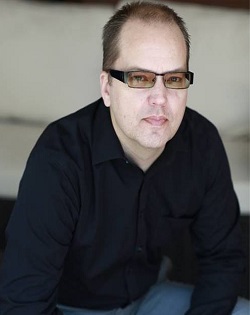 David Bell's most recent novel is LAYOVER (Berkley/Penguin 2019). He is also the author of SOMEBODY'S DAUGHTER (2018), BRING HER HOME (2017), SINCE SHE WENT AWAY (2016), SOMEBODY I USED TO KNOW (2015), THE FORGOTTEN GIRL (2014), NEVER COME BACK (2013), THE HIDING PLACE (2012), CEMETERY GIRL (2011), THE GIRL IN THE WOODS (2009), and THE CONDEMNED (2008.) With Molly McCaffrey, he co-edited the short fiction anthologies STUCK IN THE MIDDLE and  COMMUTABILITY: STORIES ABOUT THE JOURNEY FROM HERE TO THERE, which were both published by Main Street Rag Publishing. His novella, "Rides A Stranger," was published by Mysterious Press in 2013, and his short fiction has appeared in Cemetery Dance, Western Humanities Review, Backwards City Review and other journals. In 2013, CEMETERY GIRL was awarded the prestigious Le Prix Polar International de Cognac for the best crime novel of the year. His work has been translated into more than a dozen foreign languages and has appeared on USA Today, Publishers Weekly, and Indiebound bestseller lists.