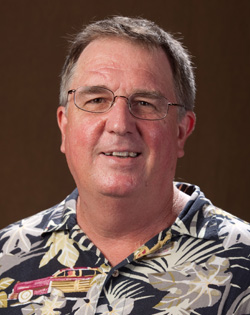 Born in Los Angeles, Dale Rigby was visited myriad summer nights by his seminal literary influence, the succubi that were (and remain) the play-by-play radio essays of the Dodgers’ Vin Scully. His first creative success, “The Secret of the Stolen Jewels,” an unabashed homage to the Hardy Boys, won first prize in Collingwood Elementary School’s literary contest (published, he now cringes to confess, under the nom de plume of Irving Rutherford).

His family skedaddled to Bowling Green, Ohio, when he was twelve. Come high school, beyond his role as a backup point guard on the hardwood (a role significantly reduced when his coach discovered that he called in sick (sic) to push wood in the Ohio High School Chess Championship), he took league medalist honors on the golf course, while co-writing and co-starring in two independent school productions, the holocaust drama “Frank Ann’s Log” and a three-act Monty Pythonesque play, “Gay Boys in Bondage.”  He would also co-star in Edward Albee’s bittersweet “The Zoo Story.”  His father, a professor of political science, visited his high school class to lecture on the constitutional right of any student who so desired to sew the moniker of “M…F…K…R” onto the hand-me-downs that were their tattered U.S. Army jackets.  There was laughter and literacy to be modeled in an American high school zeitgeist as deliciously light on standardized testing and union-busting as it was reverently rich in lagniappe and freedom of speech.

Driving while reading to California for college, he and his girlfriend imbibed aloud Tom Robbins’ “Even Cowgirls Get the Blues” and John Irving’s “The World According to Garp.” He went on to earn an undergraduate degree in English at U.C. Berkeley while working in the Mechanic’s Institute Library and as a journeyman crumpet baker in San Francisco’s Inner Sunset; he paid his tuition--$300.00 a quarter--from his tip jar (he, gently, asks today’s students whether that figure sounds anachronistic to them because, well, perhaps, the election of Ronald Reagan begat the ideological “starving of the beast” manifest in their generation’s numbing level of student loan debt?).  Said same lover and he spent weekends trying to visit every single nude beach in Northern California whilst reading Joan Didion and Larry McMurtry and sipping Asti Spumante.

That career goal checked off, he boarded the Greyhound to Iowa City, where he would be granted an M.A. in American Studies and an M.F.A. in Nonfiction Writing, during which time he won the 1990 Annual Hames Prize from the United States Chess Federation for the most artful Master-level postal chess game. If intrigued, google Dale Rigby vs. Thomas Mueller for the 33-move brilliancy! “The Dead Skin Scrolls,” an essay occasioned by his circumcision at age twenty received a Notable Mention in Robert Atwan’s Best American Essays series.  His mentor at the University of Iowa was and will forever remain the irrepressible scholar and writer and teacher and gardener and rascal Carl Klaus.

Dale earned his doctorate in 2000 at the University of Missouri-Columbia, whereupon he was hired to teach nonfiction writing at Western Kentucky University.  Here he remains, directing graduate theses, advising the WKU Knights chess club, mentoring first-year graduate student teachers, exposing first-year writing students to the habits of mind of the fair dinkum essay, nonfiction writers to the likes of Lauren Slater and Richard Rodriguez and Eula Biss and “the fatal slantindicular futility of fact,” documentary film students to Emile de Antonio and Barbara Kopple and Guy Madden, chairing the creative writing committee, presenting AWP and CCCC panels with previous WKU students, sallying forth with essays seeking to tell it slant, to write of the me to get at the not-me.  His most recent piece, “My Playing Weight,” appeared this Spring in the 15th Anniversary issue of SportLiterate, and was later chosen for the 2011 first prize in the category of “Best Chess Writing: mainstream media” by the Chess Journalists of America.

He returned/from Wakonse/to a coup/ trying to/appropriate/his persona. His idle is even more off than before. Wears his loiter like a goiter. A kidney stone stalled in Kentucky’s karst country. Divorced. Middle-aged. Melancholic. Bartleby roiling on bald tires. One more itsy-bitsy rule for itsy-bitsy people from the Pirsigian loony bin. A bother. From another planet. At department meetings. Forever asking howcomes of outcomes.

He returned from Wakonse to appropriate prescriptive personae from found forms: OmniUpdate ECMS Packages, memos measuring mean scores, assessment rubrics, QEP outcomes, thesis statements on ideal types of thesis statements; the tongue compressors of academic culture, effluvia of the “cultural training” Peter Elbow claimed in his recent Vernacular Eloquence it takes one hell of a lot of “to keep us from feeling magic in speech and writing.”

He returned from Wakonse to research the riddle of an appropriate persona. His shaman had finished with a koan to inflect as one will—

“Creative people are not nice.”

If you hear “Creative people are not nice” you hear an assured thesis statement.”

If you hear “Creative people are not nice, you hear your most certain umbrage.

If you hear “Creative people are not ‘nice,’” you just might have the ear of Montaigne.

This slumbering summer, listening on MLB.com to Vin Scully’s inimitable essays, visiting his artist mother at her pristine log cabin outside of Frankfort, Michigan, he began dreaming of a year-long sabbatical living near the garden of Sir George Somers in Bermuda and finding the finishes touches for a memoir in the form of an annotated chess game he played against Jude Acers in the French Quarter of pre-Katrina New Orleans.  Wish him luck, ok?