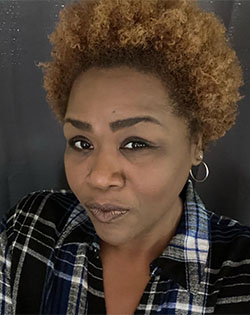 Dr. Cheryl R. Hopson is an Assistant Professor of English and African American Studies. She received her PhD in English from the University of Kentucky in 2008, and specializes in 20th Century American and African American literature and culture, and Black and Third Wave feminist autobiographical, philosophical, and life writing. Dr. Hopson is an essayist and a poet. She has published essays on Zora Neale Hurston, Alice and Rebecca Walker, as well as on Black Feminist sisterhood. Finishing Line Press published her chapbooks Fragile (2017) and Black Notes (2013). Additionally, Professor Hopson’s poems can be found in the Toronto Quarterly, Border Crossings, and Not Very Quiet, in the anthology Writing for Peace (2017), published by Dove Tale: An International Journal of the Arts, and in other publications. Originally from Southwest Virginia (love those Blue Ridge Mountains), she has been a resident of Kentucky on-and-off since 2002, and is excited to be a part of the WKU family.