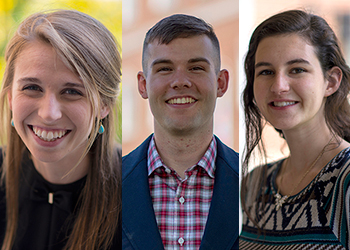 The 27 new students begin their study of Chinese at WKU with the goal of reaching a Superior level of professional proficiency before they graduate.

Flagship student Courtney Morgan was awarded a Freeman-ASIA award for her summer study abroad in Taiwan.

Five WKU students have earned Boren Scholarships of up to $20,000 to fund up to a year of critical language-focused study abroad. All five students are fourth-year students in the Chinese Flagship Program and Mahurin Honors College.

Five WKU students have earned Boren Scholarships of up to $20,000 to fund up to a year of critical language-focused study abroad. All five students are fourth-year students in the Chinese Flagship Program and Mahurin Honors College.