The School of Leadership and Professional Studies 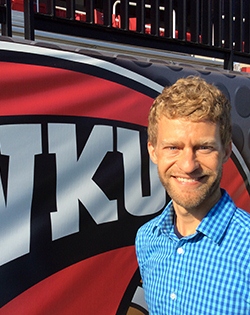 Cort's background includes work on critical thinking, the American South, food studies, the end of the world, college athletics, and the history of Christianity. His Master's thesis in History (2012) is entitled "Hal Lindsey and the Appeal of Popular Premillennialism in the 1970s." His thesis has been accessed over 10,000 times and it was the most downloaded thesis housed on WKU TopSCHOLAR in 2015. Based on the reach of his work, he was inducted into the WKU Libraries Open Access Hall of Fame in the fall of 2016.

He has also presented at local, regional, national, and international conferences on using food as content for critical thinking in first year courses.

Born and raised in Hudson, Kentucky (Breckinridge County), Cort is a lifelong Kentuckian and was a first-generation college student. He graduated from WKU in 1999 (Psychology and History) and completed master's degrees from WKU in 2001 (Education) and 2012 (History). He has served as a full-time faculty member at WKU since Fall 2001. In addition to teaching, he enjoys running marathons, reading, writing, cooking, college basketball, and spending time with his wife and two children.