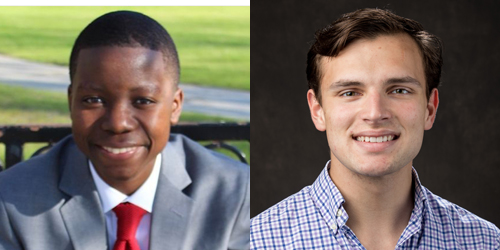 For the third year in a row, two WKU students have been selected to participate in Fulbright Summer Institutes in the United Kingdom. Derek Collins of Hattiesburg, Mississippi and Nathan Terrell of Morehead are the ninth and tenth WKU students to be selected for the prestigious nationally-competitive program since 2012.

Each year, the US-UK Fulbright Commission supports up to 60 first- and second-year undergraduates from across the United States to undertake a demanding academic and cultural summer program at leading institutions in the UK. Fulbright Summer Institutes cover all participants’ costs. In addition, Fulbright summer participants receive a distinctive support and cultural education program including visa processing, a comprehensive pre-departure orientation, enrichment opportunities in country, a re-entry session and opportunity to join Fulbright alumni networks.

Derek Collins is a first-year political science major, a member of WKU’s national championship Forensics team, and the son of Jerryl McGowan-Collins and Stanley Collins. In a four-week program at the University of Bristol, he will investigate how creative and performing arts, philosophy, and critical social theories have shaped movements for social justice across the globe, with particular attention given to racial justice and the legacies of slavery.

“I’m excited to explore the city of Bristol while also gaining a better understanding of social justice issues and movements in the UK,” Collins said. “I am extremely thankful to Dr. Melinda Grimsley in the OSD for helping me through this application process. I was so anxious, I kept refreshing my email ten times a day waiting for an invitation to interview and again for the final results.”

Nathan Terrell is a first-year political science major, Student Alumni Ambassador, and the son of Maria and Russell Terrell. In a three-week program at the University of Westminster, he will use London as a classroom, choosing an area of study among a broad range of academic disciplines while attending workshops on intercultural competencies and leadership effectiveness and development.

Terrell said, "I am so excited for the opportunity to represent my community while learning valuable and impactful leadership skills. I am so thankful for the wonderful support from all who helped me achieve such an amazing opportunity.  Furthermore, I am excited for the classes, workshops, and personal connections that will help me be my best self and make me a better servant for my community.”

Both students worked with Dr. Melinda Grimsley, coordinator of international scholarships in the Office of Scholar Development, in preparing their applications.

“The US-UK Fulbright Summer Institutes program is one of the most competitive undergraduate scholarships out there, but as long as a student is eligible, they should apply! The application process is a great way for students to take inventory of their strengths and interests and discover their path forward,” said Dr. Grimsley.

The US-UK Fulbright Commission selects participants through a rigorous application and interview process. In making these awards, the Commission looks not only for academic excellence but a focused application, a range of extracurricular and community activities, demonstrated ambassadorial skills, and a plan to give back to the recipient’s home country upon returning.

Penny Egan CBE, Executive Director of the US-UK Fulbright Commission, said, “Study abroad is a truly transformative experience for so many of those who are able to participate in it. I know this year’s cohort will make the most of this opportunity to immerse themselves in British culture and I’m sure this experience will leave a lasting impression, on both the Summer Institute participants and on those they meet and mingle with during their time here.”

The US-UK Fulbright Commission was founded by diplomatic treaty in 1948 to foster intercultural understanding between the United States and United Kingdom through educational exchange. It continues to support Senator Fulbright’s vision through scholarship and summer programs, enabling British and American citizens to study, research or teach at universities on either side of the Atlantic.