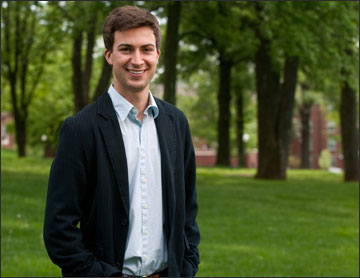 Chase McNulty, a Western Kentucky University senior from Owensboro, has been accepted at the University of Wisconsin School of Veterinary Medicine and received a scholarship to cover full tuition and fees for the first year.

McNulty, who will graduate next weekend with a degree in biology and a minor in animal science, is one of 20 non-resident students selected from 1,047 applicants. Each year the University of Wisconsin School of Veterinary Medicine selects one of its more than 300 students to receive a full tuition scholarship.

McNulty, a 2006 graduate of Owensboro Catholic High School and the son of David and Renee McNulty, applied to and was accepted at veterinary schools at Wisconsin and Auburn University.

He chose Wisconsin because of its academic reputation. The School of Veterinary Medicine is ranked No. 5 in the country by U.S. News and World Report. McNulty said he also was drawn to the school because of its well-known veterinary faculty members and its veterinary ophthalmology, oncology and orthopedic programs.

McNulty said he has always wanted to work with animals and has been working/job shadowing in veterinary clinics since the eighth grade. “In kindergarten, I wanted to be a zookeeper,” he said.

At first, his interest in veterinary medicine grew out of his love for animals, especially dogs, but in recent years McNulty said he has enjoyed working with pet owners and experiencing the joy of helping someone’s pet.

While hard work, a clear sense of purpose and academic talent have helped him succeed, McNulty is grateful for the mentoring he received at WKU. McNulty said that he decided to attend WKU because of the “outstanding” one-on-one advice he received from Dr. Gordon Jones, professor of agriculture and pre-veterinary advisor.

Dr. Jenks Britt of the Department of Agriculture and Dr. Mike Stokes of the Department of Biology also played an important role in his educational career at WKU, he said. McNulty also said he received help from the Office of Scholar Development at WKU to develop and polish his personal statement for his veterinary school applications.

McNulty’s current plan is to practice small animal medicine, but he is looking forward to exploring ways to use a Doctor of Veterinary Medicine degree to work in international conservation work. “I love international travel, and I have also grown passionate about conservation, so I am gradually becoming more attracted to this idea,” he said. He plans to become involved with the Christian Veterinary Mission, which performs short-term and long-term service trips to third world countries.

During his time at WKU, McNulty has been involved with service trips through Habitat for Humanity (to Tutwiler, Miss.) and the Catholic Campus Center (to Saltillo, Mexico, and World Youth Day 2008 in Sydney, Australia). He is a member of Kappa Alpha Order fraternity, has been a member of the Honors College, spent a semester at Harlaxton College in England and is an Alumni Leadership Scholar.

“The WKU pre-vet program has a strong record of preparing students, but this accomplishment by Chase is a highlight because he’s the first WKU student accepted at the University of Wisconsin,” Dr. Jones said.