WKU graduate selected for scholarship to study at University of Amsterdam 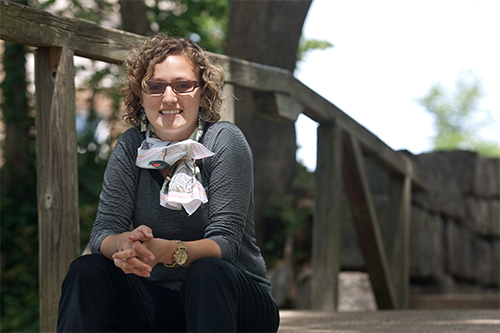 WKU graduate Cassandra Warren will pursue a one-year master’s degree in gender, sexuality and society during the 2010-11 school year at the University of Amsterdam on the Huygens Scholarship Programme.

Warren is one of 236 students selected from a pool of 1,700 applicants to receive this prestigious European scholarship. A current employee in the Office of Scholar Development, Warren graduated in 2009 with a degree in psychology and double minors in anthropology and sexuality. She is the daughter of Rene and Charlie Warren of Georgetown, Ky.

The HSP-Huygens Scholarship is offered to outstanding students in the final phase of a bachelor’s degree, or during master’s level studies, and is intended to fund study at an accredited university in the Netherlands for up to two years. The scholarship, worth 29,000 Euros ($38,300 US), covers tuition, visa fees and airfare, as well as providing a monthly living stipend for food, housing and transportation.

“It was a full day before I could tell anyone because I couldn’t quite believe that it was true,” Warren said.

It was during a study abroad course in Amsterdam, led by WKU professors Matt Pruitt and Dan Myers, that Warren first became interested in sexuality studies, as she encountered a culture with different views on the legal and cultural norms of sexuality. She will return to Amsterdam in September to study sex work and feminist thought with the faculty at the University of Amsterdam, one of the largest comprehensive universities in Europe with more than 28,000 students. The one-year master’s in gender, sexuality, and society offers students a unique interdisciplinary approach to questions of gender relations and sexual behavior in a world characterized by increasing globalization.

While at the University of Amsterdam, Warren will work with Professor Mary-Louise Janssen, with whom she has been in continued contact since 2008. Warren said she is particularly excited about this prospect, as Dr. Janssen’s research and service interests overlap significantly with hers.

Dr. Janssen has collaborated with professionals in Colombia to start ESPERANZA, an organization that is dedicated to preventing and combating the trafficking of Latin American women. Her humanitarian efforts parallel Warren’s interests in community involvement. As a volunteer at Hope Harbor in Bowling Green since 2007, Warren advocates for survivors of sexual assault. Warren is dedicated to the prospect of forging a career which will allow her to engage in both academic research and community service.

It has been a long road to Amsterdam for Warren, who first applied for a Fulbright grant and a Rotary Ambassadorial scholarship in 2008 to fund her trip. She was a Rotary finalist that year, but was not selected, nor was she chosen as a Fulbright scholar. Upon consultation with Amy Eckhardt, director of the Office of Scholar Development, Warren traveled to the Netherlands for 12 weeks last summer to take an intensive Dutch language course in order to become more competitive for scholarships.

Her second application for a Fulbright was ultimately unsuccessful, but, as Jeanne Sokolowski, Fulbright Application Coordinator at WKU, said: “It was the best application that Cassie could put together. With competitive scholarships like the Fulbright, there are always factors that are out of your control. Other applicants may have research proposals that are more appealing to the Fulbright Commission of a certain country in a given year.”

Warren’s disappointments did not deter her from searching out other means of financing her dream. “I needed to explore other options for funding, so I met with numerous people to explore other avenues to do what I wanted to do,” Warren said. In addition to applying for scholarships to pay for study in Amsterdam, she also applied to several graduate programs in the United States as an alternative plan. But her real dream was to attend the University of Amsterdam.

“Having applied for several different scholarships over the past few years, I was shocked to see my name on the list of winners,” Warren said, “especially after reading so many standard rejection letters. But I keep those letters, too, as a reminder that many times the world will tell you ‘no’ before you get a ‘yes.’ ”

Warren also acknowledged her family and friends for their unyielding encouragement and support, and the faculty members and mentors, including Dr. Kate Hudephel of WKU’s Anthropology Department, who wrote her numerous letters of recommendations and reviewed countless application drafts.