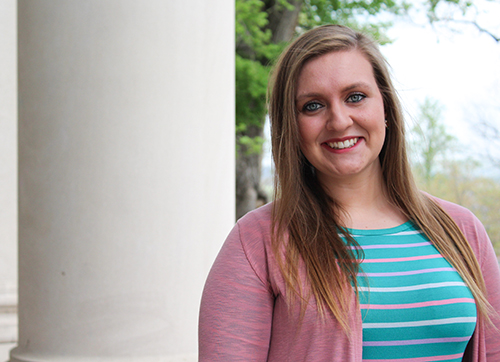 WKU student Dana Biechele-Speziale has been awarded a National Science Foundation Graduate Research Fellowship.  She will pursue a graduate degree in chemistry and receive an annual stipend of $34,000 for up to three years and a cost-of-education allowance to offset tuition and fees. Alumnae Audrey Brown and Haleh Jeddi were recognized as honorable mentions.

The NSF Graduate Research Fellowship is the oldest graduate fellowship program in the country that supports graduate students in the sciences, social sciences, technology, engineering and mathematics. Since its establishment more than 50 years ago, the fellowship program has supported more than 46,000 scholars, many of whom have gone on to become Nobel laureates and members of the National Academy of Sciences.

Biechele-Speziale is a chemistry and Chinese major and a graduate of the Gatton Academy for Mathematics and Science in Kentucky.  She is the daughter of Jennifer Biechele and Sherri Speziale of Grayson.  Biechele-Speziale plans to pursue a Ph.D. in chemistry at the Scripps Research Institute.

“First of all, I would like to thank Dr. Rui Zhang for mentoring and supporting me throughout my undergraduate career and Dr. Eric Conte and Professor Yong-Ill Lee for their mentorship and for introducing me to the project that ultimately became the basis of my proposal,” Biechele-Speziale said. “Finally, I would like to thank my parents for their continuous support and advice and my older brother for casting a shadow of excellence that I had the pleasure of living up to at WKU.”

Biechele-Speziale has been actively involved in research throughout her undergraduate career at WKU.  Most recently, she was awarded an NSF International Research Experience for Students grant to travel to South Korea and study the biocompatibility and efficacy of DOX-loaded nanocarriers when introduced to cancer cell lines.  A paper that she coauthored there has been accepted for publication in the Journal of Industrial and Engineering Chemistry.

On campus, Biechel-Speziale sought out varied research experiences.  First, she conducted research on environmentally-friendly, mechanochemical synthesis of graphene, which resulted in a presentation at the North American Thermal Analysis Society’s conference.  Through an Environmental Protection Agency Greater Research Opportunities Fellowship, she completed a summer internship studying the performance of indicators of ecosystem function under environmental stress.  Currently, she is researching the photochemical generation and kinetic studies of biomimetic high-valent manganese-oxo corroles.

"Dana is truly an outstanding young lady and serves to illustrate all the best of students,” Dr. Rui Zhang, professor of chemistry at WKU and Biechele-Speziale’s mentor, said. “She has shown great enthusiasm and potential to conduct the cutting-edge research with an indomitable willpower that helps her to overcome difficulties."

Brown, of Bowling Green, is a 2016 graduate in biology and chemistry.  She was previously recognized as an honorable mention by the Barry M. Goldwater Scholarship, the premier award for undergraduates pursuing careers in science, mathematics or engineering.  Brown is pursuing a Ph.D. at the University of Virginia.

Jeddi, of Durham, North Carolina, received her bachelor’s and master’s degrees in chemistry from WKU in 2017.  She is pursuing a Ph.D. at Duke University.

The applicants sought guidance from Dr. Audra Jennings, director of the Office of Scholar Development, in preparing their applications.

“Dr. Audra Jennings was paramount in my success in obtaining nationally-competitive scholarships and went above and beyond for me throughout the application process,” Beichele-Speziale said.