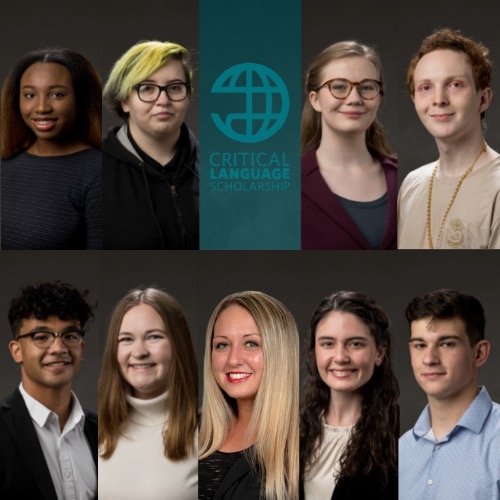 Twelve WKU students have been selected this spring as Semi-Finalists for 2022 Critical Language Scholarships.The Critical Language Scholarship Program (CLS), a program of the U.S. Department of State’s Bureau of Educational and Cultural Affairs, is an intensive overseas language and cultural immersion program for American undergraduate and graduate students enrolled at U.S. colleges and universities. Applications are evaluated in two rounds by a nationwide community of university language teachers, study abroad professionals, and fellowships advisors. Semi-Finalists are designated after the first round and Finalists are offered awards after the second round of selection; once they accept, they become CLS recipients. Recipients spend eight to ten weeks abroad in intensive language instruction and structured cultural enrichment designed to promote rapid language gains and cultural proficiency.

Olivia Blackmon of Nashville, Tennessee is a Semi-Finalist for the Chinese CLS program and a member of the Chinese Flagship Program with majors in International Affairs, Asian Religions and Cultures, and Chinese. The application process itself was rewarding for Olivia, who says, “Being guided through the application process helped me synthesizethe past and present to give the reader a glimpse of my future. OSD was such an integral part of this journey.” In the future, Olivia plans to apply for the Boren Scholarship to fund her Chinese Flagship Capstone Year and join the U.S. Foreign Service.

Megan Cole of Sharon Grove is the daughter of Victoria Bishop and Andy Cole. She is an Agriculture major with a minor in Nonprofit Administration and a Semi-Finalist for Korean. Sheapplied for the CLS because it offers the opportunity to learn Korean at an accelerated pace, maximizing proficiency when there are few opportunities to do so on campus. With strong language proficiency and the noncompetitive eligibility (NCE) benefit conferred by the CLS program, she intends to explore career opportunities in the federal government.

Molly Katherine Cornett of Lexington is the daughter of Traci and Alan Cornett and a Semi-Finalist for Persian. A second-year Anthropology major, she is particularly motivated to learn Persian language for its relevance to working with Afghan refugees; she says, “This would allow me to ‘jumpstart’ learning Persian, which I have wanted to learn for a long time but have struggled with due to lack of ready resources in the area.” She hopes in the future to continue working with refugees and one day open a resettlement agency.

Evie Dukes of Paducah is a graduate of the Gatton Academy and a member of the Chinese Flagship with majors in Chinese and Spanish. She is a Semi-Finalist for Chinese. Since Fall 2021, she has been living and studying at a research base and nature reserve in Costa Rica cultivating an interest in environmental sciences. She looks forward to opportunities to work in multiple cultural contexts to mitigate sustainability challenges such as deforestation.

Autumn Eichhorn of Lawrenceburg is a Semi-Finalist for Chinese. She is an Asian Religions and Cultures and Chinese major and a member of the Chinese Flagship Program.Like many students, CLS presents a long-awaited opportunity to study abroad; Autumn says, “I haven’t been able to study abroad since the onset of COVID, so being able to do so through CLS and see Taiwan before my Capstone Year has been animportant goal.” Autumn plans to begin her FlagshipCapstone Year in Taiwan in Fall 2022, whenshe will directly enroll in a Taiwanese university for one semester and complete a professional internship with a Taiwanese organization the following semester. Her goal is to work for the Bureau of East Asian and Pacific Affairs in the U.S. Department of State.

Allison Francis of Louisville is the daughter of Tammy and Roger Francis. A third-year major in Environmental, Sustainability, and Geographic Studies, Geographic Information Systems, and Chinese, she is a member of the Chinese Flagship Program and a Semi-Finalist for Chinese. Allison says, “Applying for CLS and working with the Office of Scholar Development has helped me to realize the scope of what I can achieve, and how my circumstances and experiences help me stand out.” She plans to bring together her developing disciplinary expertise and research experience with language and cultural proficiency to address shared environmental sustainability challenges.

Ralphy Gardner of Allensville in Todd County is the son of Kumiko and Michael Gardner. A third-year Criminology, Psychology, and Arabic major, he is a Semi-Finalist for Arabic. He is pursuing several different avenues for using his disciplinary and language skills in federal service.

Kerby Gilstrap of Bowling Green is the daughter of Kim and Rodney Gilstrap. A graduating senior in International Affairs, Arabic, and Sustainable Development (Honors Self-Designed), she applied for a Critical Language Scholarship in Arabic to build her language proficiency before taking next steps in her postgraduate life. Kerby says, “Applying for nationally competitive opportunities has helped me learn how to articulate my story, which is invaluable when applying for jobs, fellowships, and graduate school, all of which are in my future.”

Heather Keen of Rineyville is the daughter of Nancy and Glenn Mattingly and the mother of fellow Hilltopper Steven Keen and a Semi-Finalist for Arabic. An Arabic major and an Organizational Leadership JUMP student, she studied abroad with Gilman Scholarship assistance last summer and is excited about new possibilities. Heather says, “I turn 39 in just a few months and these opportunities have literally given me a second shot at life that I would have never dreamed of on my own. I have been able to transform from a local mindset to global possibilities.” Upon completing her studies, she hopes to become a General Services Officer or Facility Manager for the U.S. Department of State Foreign Service in the Middle East and North Africa region.

Kierigan McEvoy of St. Charles, Missouri is the daughter of Amy and Patrick McEvoy. A second-year Chinese and International Affairs major, she is a member of the Chinese Flagship, a cadet in the Hilltopper Army ROTC, and a Semi-Finalist for Chinese. Kierigan recommends to her peers, “Just because you think your chances are impossible, or you're not even sure you want to commit a whole summer to study abroad, still apply! You never know what opportunities might fall into your lap if you do, and on your journey, through the application process, you may learn more about yourself than you ever knew.” After graduation, she plans to commission as a 2nd Lieutenant in the United States Army and work toward improving our government's relationship with China and the Chinese people.

Lindy Sipes of Hickman is the daughter of Kelly and Jason Sipes. A Semi-Finalist for Arabic, Lindy is a graduate of the Gatton Academy and will graduate from WKU this spring with degrees in Arabic and Linguistics (Honors Self-Designed). Having studied abroad four times while at the Gatton Academy and WKU, she looks forward to pursuing additional opportunities to study and work abroad in Arabic-speaking countries.

Daniel Vuleta of Elizabethtown is the son of Laura and Daniel Vuleta and a Semi-Finalist for Russian. A second-year Criminology major, he looks forward to the chance of getting “a well-rounded view of the language and culture of Russia to give more insight to my fellow students.” After completing the Army ROTC program at WKU, Daniel will become a U.S. Army Officer and hopes to use his experience to help soldiers develop a complex worldview and grow in their understanding of other cultures.

Students sought guidance from Dr. Grimsley in the Office of Scholar Development, WKU’s CLS advisor, in preparing their applications. By inventorying their experiences and developing them into a cohesive narrative that extends into one possible future, all students gain clarity about their skills, interests, and plans for the future regardless of competition results.

The CLS Program is a part of a U.S. government initiative to expand the number of Americans studying and mastering foreign languages that are critical to national security and economic prosperity. CLS plays an important role in preparing American students for the 21st century’s globalized workforce and increasing national competitiveness.