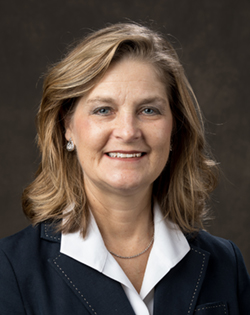 Jennifer Wilson graduated from Nebraska Wesleyan University with a Bachelor of Science Degree in Communications in 1989 and from Western Kentucky University with a Master of Arts in Education in 1995. She began her career in higher education in Owensboro as an Admissions Counselor at Kentucky Wesleyan College in 1990.  From 1994-2000, She worked for RiverValley Behavioral Health and Owensboro Mercy Health System in marketing and public relations capacities. In 2000, she moved to Bowling Green and owned and operated a music business for small children, involving more than 100 families in weekly classes and summer camp programs. In 2008, Wilson became the Communications Coordinator for WKU Libraries. In her position, she coordinates and creates promotional materials, advises a graphic design student, places advertising, advocates for literacy issues, and builds the library brand within the WKU community and in the general public. She serves and chairs numerous committees in the Libraries and on campus including the University Marketing Council, Homecoming, Alumni, Social Media, Library Leadership, Faraway Flix, and SOKY Book Fest.

Jennifer is a member of the Professional Marketing Association, having served on the Markie Awards committee. She has worked for the Center for Gifted Studies for more than ten years in the Super Saturday program, teaching various enrichment classes. She is an active volunteer in the community, participating in Junior Achievement instruction, and serving at First Christian Church of Bowling Green, having led various committees and programs.