What is an Illicit Discharge?

Any release of chemicals, or pollutants to the stormwater system on WKU's campus. Examples include water from washing vehicles, paint brushes, floor cleaning, etc. Only rain water, snow melt and uncontaminated potable water should go into the storm water drains.

Bowling Green and its surrounding areas have lots of caves, disappearing streams, and sink holes.  Geologists call such landscapes Karst, and they know that these areas have a lot of underground water resources.  There is also greater risk of pollution from activities and spills occurring above ground.  For more information about how you can protect ground water, visit the following links: 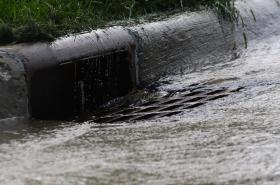