Domestic Science, Domestic Art, and Domestic Economy were the various names applied to the new deparment. At the time, there were only three buildings: the old Potter College Building, the new Vanmeter Hall, which included administration offices and auditorium; and Cabell Hall, where Home Economics had the second floor and music the first.

The concept of the new department had been unanimously adopted by the Board of Regents of the Western Kentucky State Normal School on January 28, 1909. The motion was that "Domestic Science be introduced into the course of study as soon as it can be properly taken care of." A donation of $2,000 to the school facilitated the purchase of physical equipment connected with the new course of study. The agreement noting the conditions of the donation was signed by the Board of Regents and the Executive Secretary of the Peabody Education Fund.

Western's first president, Dr. H. H. Cherry, was instrumental in bringing Miss Iva Scott to Bowling Green in 1911 to launch the new department. Letters from Dr. Cherry's files reveal his ingenuity in obtaining equipment needed to make the new "School of Domestic Science and Domestic Arts a leading feature of the institution." Although he did not have the funds in hand, he confidently assured potential suppliers that "The General Assembly of Kentucky meets next January and there isn't a doubt about a splendid appropriation being made." (H.H. Cherry files, WKU Archives.)

Domestic Economy was listed as a new department in the Summer 1911 State Normal Bulletin with the following explanation:

The term is not satisfactory but [is] used more often and is more generally understood to include full range of the subject. At present three lines of work will be offered: Elementary Cooking; Study of Foods; Model Sewing.

The following statement of the purpose of the department was set forth in Western Normal Letters (October, 1915):

Home Economy aims not only to prepare girls to teach problems of food, shelter, clothing and household management in an elementary way, but also to increase ideals in home life and environment that the next generations will be stronger physically and mentally thus being able to better meet problems of life. Above all we strive to make the course a working practical one--one that will make home comfortable, sanitary, economical and beautiful.

Miss  Iva Scott, the first head of the Department of Home Economics at Western, has been credited with much of that department's success. Alice Kinslow Pace, a student and assistant instructor with Ms. Scott, noted at the Iva Scott Club Banquest in May 1957 that:

The catalogues and publications listed the courses, they described the equipment, and enumerated various statistics, but as with all successful developments, the great determining factor in the early Home Economics Department at Western was very intangible. It was something which could not be put on the printed page nor could it be measured in statistical data--the real determining factor in the early foundation of Home Economics at Western was the ability and personality of Iva Scott.

Except for a brief period during her mother's illness in 1916 and a leave of absence from 1918 to 1921 to serve as Director of Propaganda in Food Conservation--an appointment made by Herbert Hoover as Food Administrator for the United States--Ms. Scott headed the department from its inception until her untimely death in 1921. Betsey Madison and Ola Johnson, respectively, filled the position in Miss Scotts' absence.

The department head appointed in 1921 was Miss Annie Lee Davis, who served until 1924. It was during this time that the four-year program leading to a Bachelor of Science degree in Home Economics was developed. The Normal School became Western Kentucky State Normal School and Teachers College in 1922, and in 1924, the first graduating class included five Home Economics majors. Also, the first home management house was opened during that year.

In the fall of 1924, Miss Charlotte "Lotta" Day became head of the department, and the staff had increased to four. A new building, which housed the department, was constructed in 1926, and this facility included well-equipped clothing and foods laboratories, a modern equipment laboratory, an art laboratory, home kitchen, dining room, fitting room, class rooms, reception room and offices.

In 1930 "Normal School" was dropped from its name, and Western became Western Kentucky State Teachers College. By 1931, the department had six instructors, and a new home management house on Ogden campus had opened. In 1937, the word "Teachers" was dropped from the name and the name became Western Kentucky State College. The rapid growth of the department that characterized the 1930s led to the establishment of off-campus teaching centers to accommodate student teachers. The first of these was located in 1939 in the high school at Auburn, Kentucky, with students commuting by public bus.

In the fall of 1956, Miss Marie Adams became the head of the department of Home Economics. Miss Adams was one of the five Home Economics graduates in 1924--the year of the first four-year graduating class. The department grew steadily during the 1950s and 1960s, necessitating the opening of a new and large home management house and remodeling of the building housing the department. In 1964-65 the department had nine staff members and graduated fifty-three students. The Beta Delta Chapter of Phi Upsilon Omicron National Home Economics Honor Society was installed in 1966--the same year that Western became a university. Thirty-seven students were initiated into the newly-established Beta Delta Chapter on May 13-15, 1966. The Beta Delta Alumni Chapter was installed on March 27, 1971, with Evadine Parker as the organizing president.

The department has occupied the new Home Economics facility, the E. H. Canon wing of the Academic Complex since January, 1969. New majors had been added by that time, including Dietetics and Institution Administration, as well as Interior Design and Textiles and Clothing. Dr. Dorothy Dunn (1967-1968) followed Miss Adams as head of the department, and Dr. William Hourigan served as interim head the next year. Dr. William A. Floyd then headed the Department of Home Economics and Family Living from 1969 until 1991, when he retired.

Dr. Carl Hall became head of the department in July, 1991. During his tenure, the name of the department was changed to the Department of Consumer and Family Sciences, following the nationwide trend to update the image of Home Economics to include all disciplines encompassed by the field. The department went through a major curriculum update in 1993. At that time, the department listed the following majors: Dietetics; Home Economics Education; Hotel, Restaurant, and Tourism Management; Interior Design; and, Textiles and Apparel Merchandising. A new department newsletter, "Linkages" was published for the first time in Summer, 1993, with Dr. Virginia Atkins as the editor.

WKU housed one of the last existing home managment houses in the nation until 1994. This facility was located on the ground floor in Bates-Runner Hall. There were 13 full-time faculty in the department in the Spring of 1995.

The first CFS computer lab was opened under Dr. Hall's leadership, and the first CFS website was developed by Lauri Warden in 1996. Dr. Hall retired from WKU in June, 1997. Dr. Louella Fong served two years as Interim Department Head and was named Department Head in 1999. A new Associate Degree in Interdisciplinary Early Childhood Education was approved and began enrolling students in 1998.   The CFS computer lab became the College of Health and Human Services Academic Center for Excellence (ACE) in Fall, 2004.

The Early Childhood Center (ECC) was developed as a part of the CFS department, and is housed at the Clinical Education Complex. A full-time Director, Lisa Murphy, was hired in 2005. The ECC serves developmentally-delayed preschool children as well as non-developmentally-delayed children in a play group setting, which the children have dubbed, "Big Red School."

Dr. Fong retired in June, 2007. Dr. Doris Sikora was named as Interim Department Head, and she became the Department Head in January, 2008.  New minors and a certificate offering were added in 2007-2008, which include: Child Life minor, Child Studies minor, Family Home Visiting certificate, and Nutrition minor. The Interior Design program received Supported Program status with the national Kitchen and Bath Association in Summer, 2008.   A new  minor, Meeting, Convention, and Exposition Planning, was approved on January 30, 2009, and began enrolling students in Fall, 2009.

The department began plans for celebrating its 100th birthday in 2011.  The name of the department was changed at the January, 2011 Board of Regents meeting, and as of April 1, 2011, became the Family and Consumer Sciences department, which will align the name with the national organization.  To commemorate the 100-year anniversary, Dr. Sikora commissioned a logo to be used throughout the year to raise awareness of the department and it's focus of Living, Learning, and Leading.

Nominations were accepted and 100 alumni or former faculty of the department were selected as people who had a positive influence on the department or on their major field throughout their career.  A dinner was held in Fall 2011 to celebrate the contributions of these individuals to the department.The department was fortunate to have the four living department heads all present at this event. 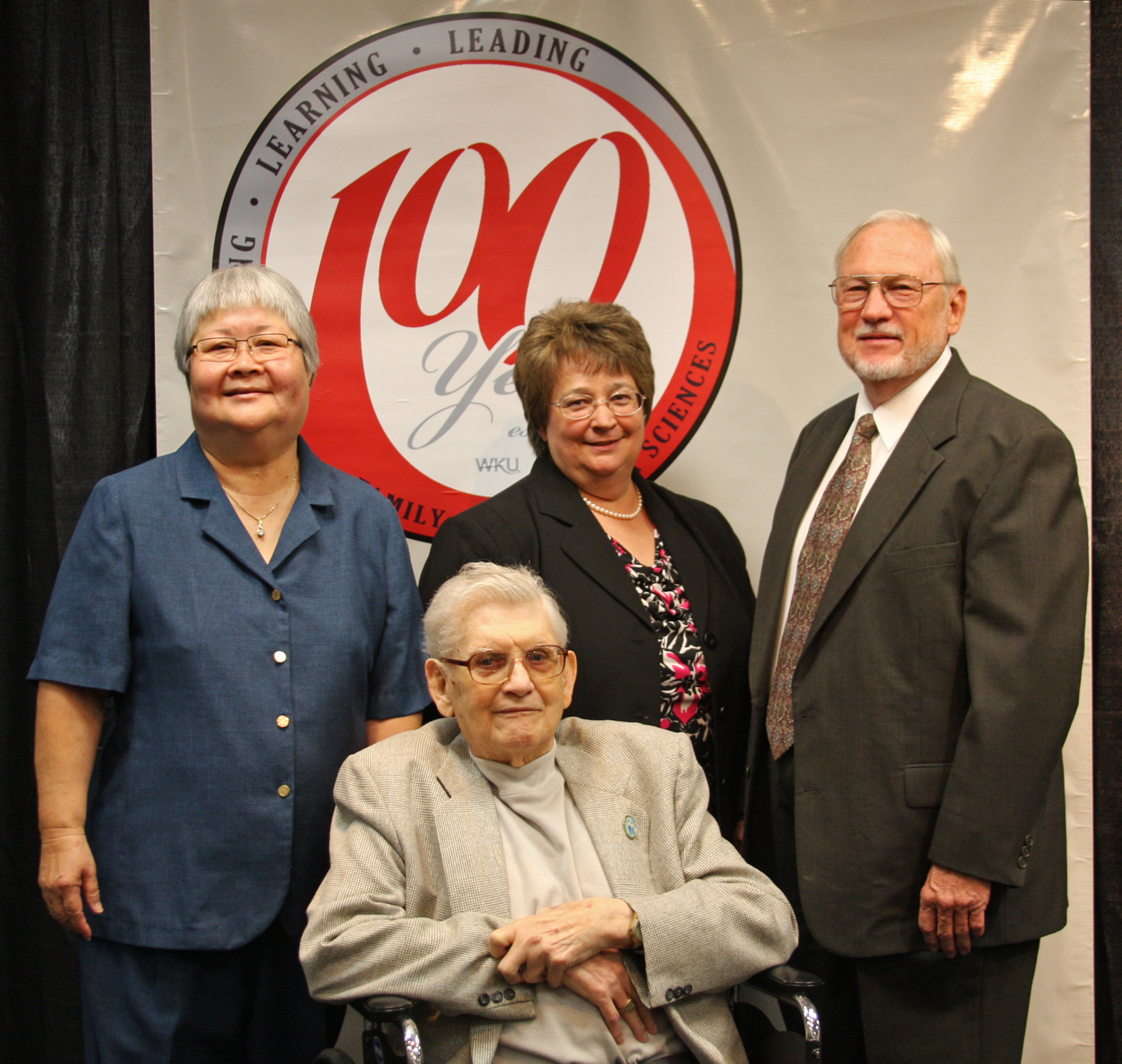 In Summer, 2012, the dietetics area was approved by the Accreditation Council for Education in Nutrition and Dietetics of the Academy for Nutrition and Dietetcs to admit their very first students for a graduate Dietetic Internship certificate program.  Ten students were admitted in Fall, 2012 to complete this program.

In Fall, 2012, the Design, Merchandising and Textiles major was renamed to Interior Design and Fashion Merchandising (IDFM) to be more descriptive of the major and more easily discovered by prospective students searching for information about the program at WKU.

In Summer, 2013, a new certificate program, Kitchen and Bath, was approved.  This program includes eight courses that will prepare students to meet the demand of commercial and residential customers for interior design professionals with expertise in this area.  This program is designated a supported program by the National Kitchen and Bath Association.  In Spring, 2014, a new minor, Family Home Visiting, was added to the department's offerings.

Students in the department have been honored with scholarships and awards throughout the department's history.  FACS students have been named Scholar of the College 15 times since May, 2002. The Beta Delta Chapter of Phi Upsilon Omicron has won the national professional project competition five times. Four of the five times, they have won the first prize two years in a row in 1998 and 1999 AND 2005 and 2006. their most recent win was in 2013 with their project: Building Traditions, Developing a Literary Legacy, as well as Caring, Service, and Support Legacies.

In June, 2016, final approval was given to offer a Masters degree in Child and Family Studies, and the first students were admitted to that program in Fall, 2016.  The Interior Design Bachelor of Science degree was granted accreditation by the National Association of Schools of Art and Design (NASAD) in October, 2016.

The department name was changed to Applied Human Sciences effective July 1, 2017, to more accurately reflect the type of hands-on, applied programs that are currently available to students in the department. The Early Childhood Education associate degree received accreditation by the National Association for the Education of Young Children (NAEYC) in Summer, 2017.

In Fall, 2018, the department added a new certificate program, Early Childhood Education Director Certificate, which is a complement to the state's Early Childhood DIrector Credential.  The first ever AHS Department Showcase was held at Indian Hills Country Club in Fall 2018, which highlighted the hotel, restaurant, and tourism management program through a buffet of finger foods and the family and consumer sciences and fashion merchandising programs through a fashion show of career clothing with children included as models. The department received approval to create an AHS YouTube channel featuring short talks by the faculty on topics of interest and importance to the community.  This channel was set to premier in 2019.