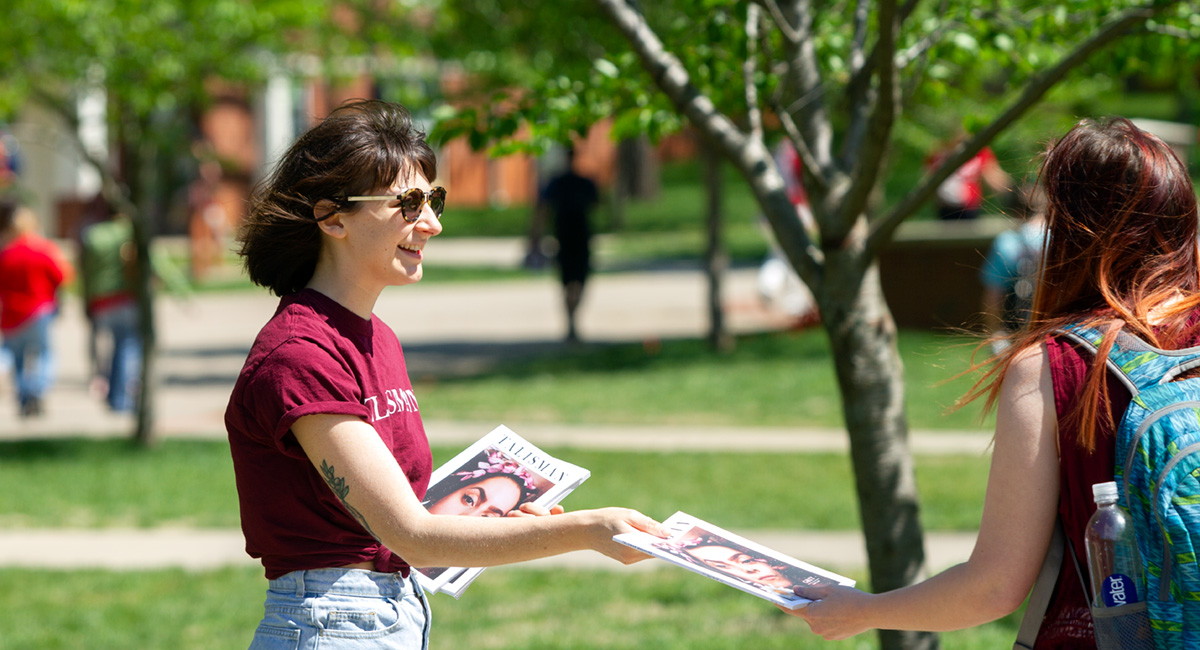 The Talisman is a life, culture and news outlet with a magazine distributed at the end of each semester and daily content published at WKUTalisman.com.

WKUTalisman.com publishes a mix of eclectic, intelligent content giving a fresh look at life on the Hill and in Bowling Green.

The Talisman magazine is a showcase for exquisite photography and excellent long-form storytelling. Students working on the Talisman get an opportunity to oversee a complex, semester-long project of producing a magazine, which helps them develop management skills valued in the professional world and highly prized in the nation’s news organizations.

The Talisman has a long history. It started as a yearbook published every year from 1924 through 1996, when it ceased publication. In the following seven years, there was no annual record of WKU history from the student perspective and little in the way of photographic documentation of a pivotal period in the university’s life. With the support of WKU's then-president, Gary Ransdell, and key alumni, the Talisman was revived in 2003 and continued publishing as a top quality yearbook -- and the keeper of WKU history from a student point-of-view -- until its final edition in 2016. The Talisman website was launched during the 2015-16 school year and the first Talisman magazine was published in fall 2016.

The Talisman has garnered national acclaim for its impactful photography and powerful journalistic writing. It broke the mold for college yearbooks. We're still carrying that freethinking mindset today as we adapt to match the array of journalism and communications careers Talisman students pursue after graduation.

Throughout its history, Talisman has always maintained a national stature. It has accumulated 21 Pacemaker awards, including 18 Yearbook Pacemakers, two Online Pacemakers and, in 2020, the Magazine Pacemaker, Talisman's first for the magazine. The Talisman remains on the cutting edge of what a university publication can be.

Work for the Talisman

The Talisman offers paid positions in writing, photogrpahy, videography, design, illustration, marketing and editorial leadership. Students can apply online at WKUTalisman.com/jobs. You can also stop by our office in the Adams-Whitaker Student Publications Center to introduce yourself to editors and learn more.