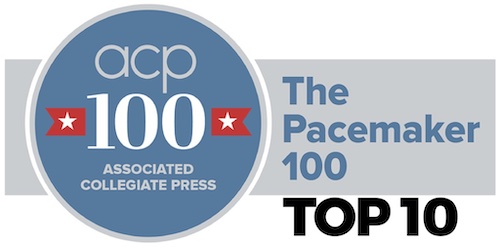 The College Heights Herald, WKU’s student-led news organization, was named to the Associated Collegiate Press Pacemaker 100 Top 10 list on Saturday at the National College Media Convention, honored as the sixth most successful student media outlet in the century-long history of ACP and its prestigious national Pacemaker Awards.

In addition to coming in No. 6 in the Pacemaker Top 10, the Herald added two additional Pacemaker awards to its trophy case, achieving Pacemaker status for 2022 as a newspaper for its print edition and as an online news outlet for WKUHerald.com. Talisman also won a 2022 Pacemaker for WKUTalisman.com.

The Pacemaker is the most prestigious honor in collegiate journalism, with the Pacemaker designation going to student-led outlets judged to reach an exceptional level of quality. All together, WKU Student Publications has now won 44 Pacemaker awards – 22 for Talisman, 21 for the Herald and one, the first Innovation Pacemaker in 2020, for the Cherry Creative branded content studio.

“What this says is that our students produce some of the best journalism of any students at any university, and they’ve done it consistently for more than 40 years,” said Chuck Clark, director of WKU Student Publications. “These students’ outstanding performance this year, and their consistent track record for excellence, shows that they continue to perform at an exceptional level, among the best in the country.”

In addition to the three Pacemakers awarded to the Herald and the Talisman for 2022, WKU had three additional Pacemaker finalists. Both publications were finalists for ACP’s first Multiplatform Pacemaker, which judges an outlet’s work in print, online, newsletters, video and audio, and Talisman was a finalist for the Magazine Pacemaker.

Also at the Washington convention:

Last year, both the Herald and the Talisman were named to ACP’s Pacemaker 100, the 100 most successful student publications in the award’s history. This year, ACP announced its Top 10, as ranked by points accumulated for winning Pacemakers and for being finalists since the competition began in 1927.