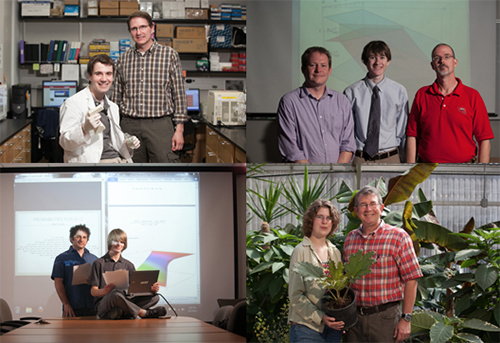 Charles “Chadd” Coomer, a biology and chemistry double-major from Louisville; Michael Crocker, a second-year student in the Carol Martin Gatton Academy of Mathematics and Science from Bowling Green; and Clarice Esch, an agriculture major from Somerset, received scholarships to continue original research.

Lukas Missik, also a second-year student in the Gatton Academy from Danville, received an Honorable Mention in the national competition. Universities may nominate up to four students each year.

The students’ success stems from the emphasis placed on undergraduate research at WKU and in the Gatton Academy. Goldwater Scholars are selected based on their academic performance and potential for a research career.

“These students should be commended for demonstrating their future potential effectively through their outstanding research essays and research productivity to date,” said Dr. Kevin Williams, Goldwater faculty representative and associate professor of chemistry.

Each of the students worked closely with their mentors and the Office of Scholar Development to develop cogent applications, submitting numerous drafts over the course of several weeks. “The faculty who have effectively mentored these students in research and the classroom should be applauded for their efforts,” Dr. Williams said.

Established by the U.S. Congress in 1986 to recognize the former senator from Arizona, the scholarship program identifies and honors students who excel in and are pursuing research careers in the sciences, mathematics and engineering. Winners receive $7,500 annually with which they can pay for undergraduate tuition, fees, books and room and board.

WKU is one of 24 institutions where each scholar nominated was recognized by the program. Out of more than 1,100 applicants nationwide, only 282 were selected as scholars and fewer than 200 others received Honorable Mention recognition.

WKU President Gary A. Ransdell commended the students on their willingness to take on ambitious research projects.

“The success these students demonstrate through this recognition shows what can happen when you pair excellent students with a caring, wonderful faculty and the support system available at WKU,” he said. “This is a tribute to their hard work and determination and the guidance and support of their faculty mentors.”

Coomer, a junior in the Honors College at WKU and the son of Evell and Don Coomer, has been involved in microbiological research for two years. In the lab of Dr. Rodney King, associate professor of biology, Coomer is characterizing viruses that infect bacterial cells so that they can be sorted into different clusters. Before beginning his research, he was enrolled the Genome Discovery and Exploration Course at WKU, a part of the National Genomics Research Initiative, where he first worked with Dr. King.

“I instantly became drawn to microbiology research from this experience and decided to quickly find a professor involved in microbial sciences,” he said. “I would like to thank Dr. King for the immense amount of support, encouragement and instruction he has given me. I would also like to thank Dr. Audra Jennings from the Office of Scholar Development for helping me refine my Goldwater Application.”

“I’m very pleased that Charles has been awarded the prestigious Goldwater Scholarship. This is an impressive achievement for which he should be very proud,” Dr. King said. “I first became aware of Charles’ potential for research in the Genome Discovery and Exploration Program at WKU, where he demonstrated self-motivation, inquisitiveness and a great work ethic. His future is bright.”

“I felt grateful and ecstatic when I heard the news,” Coomer said after celebrating with fellow recipient Clarice Esch. “This success has solidified my plans to pursue a Ph.D in microbiology or virology.”

The son of Patricia and Scott Crocker, Michael was informed of his success while at the annual meeting of the American Chemical Society.

“I woke up to find that I had a missed call from Derick Strode, the assistant director for academic services at the Gatton Academy,” he said. “He told me the news when I called him back and then I shared the good news with my family before meeting up with one of my research advisors.”

Crocker expressed thanks to Drs. Pesterfield and Maddox for their support throughout the application process.

Drs. Maddox and Pesterfield called Crocker an exceptionally talented young man who is gifted not only in the classroom but in research as well.  They said his intellectual capacity and strength of character have him poised to have a bright and productive career in science.

Following his undergraduate studies, Crocker plans to pursue a Ph.D. in chemistry and chemical engineering. He will then conduct research in organic chemistry in the private sector.

Esch, the daughter of Joe and Carol Esch, graduated from the Gatton Academy in 2011. A previous recipient of the Greater Research Opportunity Fellowship from the Environmental Protection Agency, she is conducting research to find alternative fertilizers to reduce the pollution associated with nitrogen-based products.

“During my first few weeks at WKU, I knew that I wanted to work in the greenhouse,” she said. She immediately met with Dr. Martin Stone, associate professor of agriculture, and discussed research ideas.

Now in her third year of research, Esch is planning to pursue a Ph.D. in plant ecology to continue research to make agriculture practices more sustainable.

“Clarice Esch is a fearless learner and an academic adventurer.  Since coming to WKU almost three years ago she has been an exemplary student and an outstanding researcher,” Dr. Stone said.  “While earning a top grade in some of the toughest science courses on campus, she conducted research with minimum oversight and pushed our knowledge of nitrogen-fixing symbiosis much farther than it had been.  Her future as a scientist is very bright, and she will make many important contributions to her field in the years ahead.”

Esch said that she found out about her success via Facebook. “I wasn’t expecting the news until later in the week. I was completely delighted and a bit shocked,” she said. “Afterwards, I spent my entire afternoon working in the lab just to confirm my love for my work.”

Missik, the son of Christine and John Missik, is in the second year of his current research project. He spends much of his time working with Dr. Dominic Lanphier, associate professor of mathematics.

“My research focuses on finding the probability of winning a round-based duel,” he said. “We also examine the asymptotics of such duels, in other words, what happens when the hitpoints of each player increase dramatically relative to the possible damage being dealt.”

“Lukas and I had a lot of fun on our project, and we both learned a tremendous amount of new mathematics,” Dr. Lanphier said. “Like most research projects, it keeps heading into new and interesting directions. Lukas is an exceptionally talented and bright student.”

“I would like to thank Dr. Lanphier, my parents, and the Gatton Academy for making this opportunity possible for me,” Missik said.

About the Office of Scholar Development: The Office of Scholar Development is committed to helping WKU students in all majors and degree programs develop the vision, experience and skills to be independent, engaged scholars. OSD welcomes the opportunity to work with students interested in the Goldwater Scholarship Program or other similar opportunities. Contact: Dr. Audra Jennings, (270) 745-5043.

About the Honors College at WKU: WKU is home to the only honors college in the Commonwealth of Kentucky. Created in 2007, the Honors College at WKU provides an intimate, highly selective learning environment where college-age gifted and high-achieving students can develop the skills to prepare them for success in the nation’s top academic and career opportunities. Contact: Eileen Ryan, (270) 745-2081.

About the Gatton Academy: The Gatton Academy offers a residential program for bright, highly motivated Kentucky high school students who have demonstrated interest in pursuing careers in science, technology, engineering and mathematics. Sixty students each year are admitted to the program through a competitive process. Instead of spending their junior and senior years in traditional high schools, students enroll in the Gatton Academy and live in a uniquely dedicated residence hall. The goals of the Gatton Academy are to enable Kentucky’s exceptional young scientists and mathematicians to learn in an environment which offers advanced educational opportunities and to prepare them for leadership roles in Kentucky.  At the end of two years, Gatton Academy students will have earned at least 60 college credit hours in addition to completing high school. Contact: Corey Alderdice, (270) 745-6565.