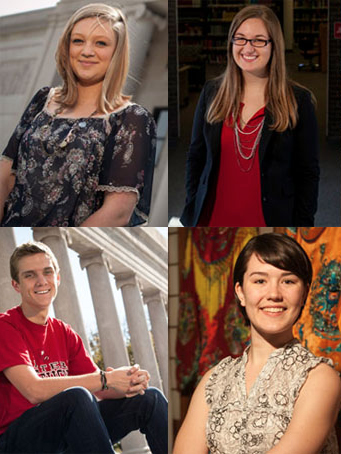 Four students in the Chinese Flagship Language Program at WKU have been awarded U.S. Department of State Critical Language Scholarships.

Jessica Brumley of Lawrenceburg, Hannah Garland of Somerset, Cody Hutchins of Louisville, and Alexandra “Dare” Norman of Bowling Green will use the scholarships to study Chinese this summer in various locations.

Dr. Melinda Grimsley-Smith, coordinator of International Scholarships for OSD, works with students applying for the CLS, helping them to prepare effective applications.

“We generally have strong applicant cohorts for the Critical Language Scholarship program, but this year’s was exceptional because of students’ commitment to studying culture, history, business and politics alongside the language of certain regions. When we talk about international reach at WKU, we’re talking about this broader awareness and interdisciplinary depth in addition to actual study abroad,” she said. “These awards have become increasingly competitive and I’m certain that WKU will maintain its presence among the recipients if we continue to encourage integration between language and different disciplines.”

Like most Chinese Flagship students, Jessica Brumley, a junior majoring in English for secondary education, joined the Flagship with no prior language experience.

“I have grown to appreciate Chinese culture so much that I hope to teach English there after I graduate,” she said. “The full immersion for language that the CLS offers sounds daunting, but it has the potential to make me a better speaker and open me up to a new culture and opportunities.”

Brumley will be making video blogs to document her progress and familiarity with the Chinese language. She is excited to engage in conversations with native speakers on a daily basis.

“I know characters and vocabulary, but understanding the feel of the language is really difficult unless you are constantly surrounded by it.”

Hannah Garland is a junior pursuing degrees in international affairs and Asian religions and cultures. Previous experience in China has helped to focus her interests and goals. During CLS, she wants to engage in the local community of Qingdao while studying the language, preparing herself for a career in international adoption law.

“I plan to find an orphanage I can volunteer through or some kind of law office,” she said. “I have fallen in love with language and could not imagine doing anything else. It is an amazing feeling being able to realize your goals; WKU and the Chinese Flagship program have equipped and helped me to do so.”

Cody Hutchins, a junior, is currently sailing around the globe with the Semester at Sea study abroad program. An international business major, he will soon apply for the Chinese Flagship Capstone Experience Year at Nanjing University. The CLS program will provide him an opportunity to reach the language proficiency level necessary for application.

Having studied abroad in China before, Hutchins vividly remembers first setting foot on the Great Wall of China and likens this experience to receiving news of his scholarship.

“I remember feeling like I had truly accomplished a major goal in my life,” he said. “I hope to absorb as much of the culture as possible while striving to make lasting connections that will benefit me in future business endeavors.”

Dare Norman is studying musical theatre. She is in her junior year of studies at WKU and spent the fall semester of 2012 in Harbin, Heilongjiang, learning the language and studying traditional Chinese art forms.

“Through the Flagship and my semester abroad, I’m at a point where I can say basic things understandably and communicate ideas,” she said. “I hope to work on conversation this summer and learn many nuances of the language.”

Norman is encouraged by the support that the Honors College at WKU and the Chinese Flagship Program offered her during her time at the university.

“They have both been tremendously beneficial to my experience at WKU, not only because of the scholarships and travel opportunities they offer, but also because of the wonderful support team they provide,” she said. “Many of my dearest friends, happiest memories, and favorite words of encouragement have come from the Honors College at WKU and the Chinese Flagship Program.”