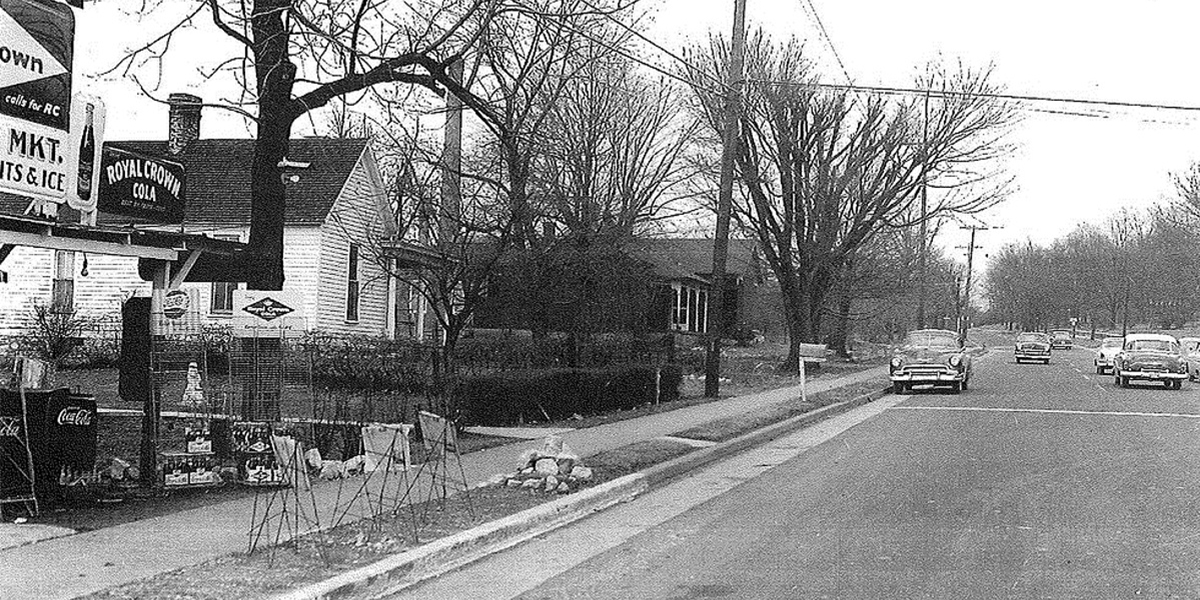 Looking north up Russellville Road, the main arterial running through Jonesville. Jonesville was a thriving African American neighborhood that was demolished to expand WKU in the 1960s. Today this street has been renamed Avenue of Champions. College Heights Boulevard can be seen in the distance at the bend in the road. This section of Jonesville is today the location of Diddle Arena, Downing Student Union, and Bates Runner Hall. Credit: Jonesville Vertical File, Kentucky Museum Library Special Collections, Western Kentucky University, Bowling Green, Kentucky.

The Jonesville History Project was started by a small team of WKU students as their group project for a class (Honors 251: Citizen and Self) in Fall 2014. The team included Dr. Alexander Olson as faculty director, Denis Mujic as technology specialist, Ms. Angela Townsend as a liaison with former residents, and three WKU students: Catherine Rice, Chelsea Murray, and Emily Peck. The team received valuable guidance from faculty in History and African American Studies and look forward to building additional partnerships as the project develops.

Jonesville was a predominantly African American community in Bowling Green, Kentucky, that was demolished in the 1960s to make way for the expansion of the WKU campus. This incident echoed a pattern across the country where the power of eminent domain was utilized to seize property from minority communities for large public works projects under the guise of urban revitalization. Although this history is well-documented in places such as Detroit and New York City—where I-75 and the Cross Bronx Expressway tore through historically black neighborhoods—the consequences for smaller cities such as Bowling Green were no less severe.

"Jonesville was a small African American community in Bowling Green, founded by free slaves shortly after the Civil War. The earliest land deed dates back to 1881. The community was named after "Grandma" Jones who presumably owned a large amount of property. Jonesville itself was about thirty acres in size. These thirty acres were bordered by Big Red Way, Russellville Road, Dogwood Drive, and the railroad tracks."  Wright, Ali, "UA1B2/1 The Jonesville Controversy" (2004). Student/Alumni Personal Papers. Paper 70. http://digitalcommons.wku.edu/stu_alum_papers/70

This is the landing page for the Jonesville History Project that was constructed in the Fall of 2020.

View a documentary on the history of Jonesville created by Aimee Briley, a WKU student in Ethnographic Film in 2009.

Ms. Angela Townsend, a resident of Jonesville, conducted a video with MHC scholars in 2014.