There are three different stories behind the origin of the ghost. The one most commonly known to students is that a construction worker fell through the skylight in the lobby and was killed. In this version it is said that the blood of the worker reappears when the floor is washed.

Another version says the ghost is a student who was hanging lights above the stage and fell onto the floor below. This story also has it that the young man's blood cannot be removed from the stage floor and finally a new floor had to be laid.

Some have incorporated these two stories into one. The combined version says that a construction worker was killed, but that he fell through a skylight onto the stage. Since there is no skylight over Van Meter's stage this was explained by saying Van Meter had been rebuilt and the skylights above the stage were removed.

The third story behind the ghost of Van Meter is the least known but the most unusual. It has been said that there are many caverns underneath the hills of Western.

This version says there is a hermit living in these caves and has found a secret passageway into Van Meter. When he visits, he carries a blue lantern, which explains the blue light that is associated with the ghost.

Probably the oldest story at Western is the tale fo the ghost in Van Meter Hall . . . while the current home of the University Relations was being built from 1909 to 1910, something terrible happened. A construction worker fell to his death from some scaffolding.

Some say the man's demise was caused by a distraction . . . most say it was the thrill of seeing an airplane in the sky. As the legend goes, he fell onto the floor of Van Meter's 2,000-seat auditorium.

Now, the spirit of the man's wife and daughter roam Van Meter, singing and talking in voices no one can understand. 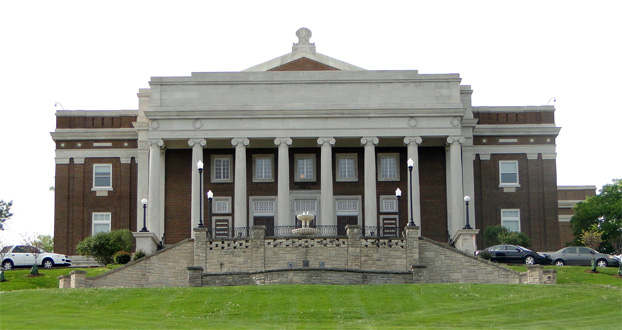