Center for Applied Science in Health and Aging News 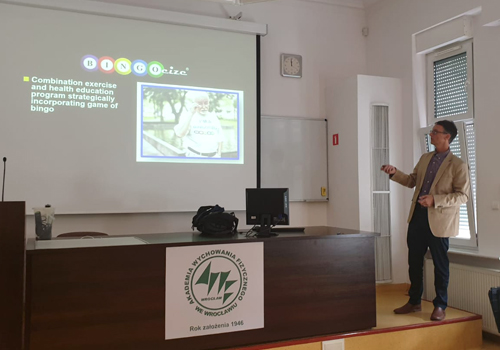 In early October, WKU Center for Applied Science in Health & Aging (CASHA) Director, Dr. Jason Crandall boarded a plane to Wroclaw, Poland, located in the western part of the country, to serve as a Visiting Professor with the University of Wroclaw, a public research university that regularly invites entrepreneurs, scientists, and artists from around the world to exchange ideas through participating in a lecture series and tours and visits to local universities.

Dr. Crandall, Associate Professor of Exercise Science and Director of CASHA, was invited by the Wroclaw Mayor and university directors to give lectures on Bingocize(R) and share ideas with Wroclaw scientists and students. Bingocize(R) is an evidence-based health promotion program developed by Dr. Crandall that has been implemented in over half the US states as well as England, Poland, The Philippines and Israel.

While in Wroclaw, Dr. Crandall also toured a nursing home, noting the similarities and differences from American long-term care facilities. Dr. Crandall will return to Wroclaw in May 2020 as part of the Visiting Professors series.

CASHA Graduate Students in the Spotlight