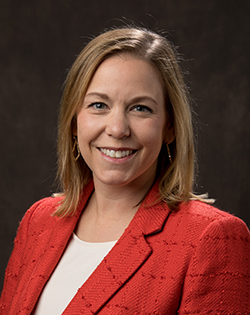 Jennifer Breiwa Smith was named Director of Government and Community Relations for WKU in January 2009.  She serves as a legislative liaison working with members of the Kentucky General Assembly, the United States Congress and both state and federal legislative staff.  She also serves as a liaison to local governments in WKU’s 27 county service region, advancing partnerships between those communities and the University.

Smith began her career as the Program Director for the Bowling Green Area Chamber of Commerce.  In this role she was responsible for overseeing numerous special events, committees and programs including governmental relations.

Smith earned a Bachelor of Arts in public relations from WKU in 2003 and will complete a Master’s in Public Administration in May 2017.  She is a 2015 graduate of Leadership Bowling Green and volunteers for Junior Achievement of South Central Kentucky and the Bowling Green Area Chamber of Commerce. Smith is married to Aaron D. Smith, has a daughter, Lillian, and is a member of Holy Spirit Catholic Church in Bowling Green, where she serves as Children’s Liturgy leader.