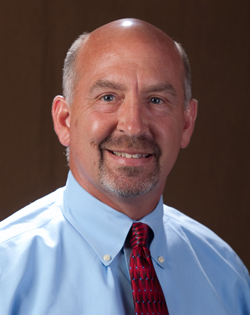 Bryan B. Russell was named Chief Facilities Officer for Western Kentucky University in May 2014. He is responsible for the leadership and management of WKU’s Facilities Management Department, Planning, Design, and Construction Department, Environmental, Health, and Safety Department, and Office of Sustainability.

Bryan came to WKU with the Sodexho Marriott Management Construction Division in 1999 as a Senior Project Manager during the $60M transformation of the residence halls completing Bates Runner Hall, Minton Hall, Poland Hall and Directional Halls during his tenure. Bryan returned to WKU in 2008 as Director for the Planning, Design, and Construction Department. Since his return to WKU, he has provided oversight for approximately $300M in completed construction. Currently this team is managing over $100M in active construction projects for WKU.

Prior to his arrival at WKU, Bryan worked for Detrex Corporation, Equipment Division for 15 years in a worldwide market for custom cleaning equipment. Bryan served in many roles from Application Engineer, Sales Engineer, and ultimately as Business Manager.

Bryan earned a Bachelor of Science in Mechanical Engineering Technology from WKU in 1984.