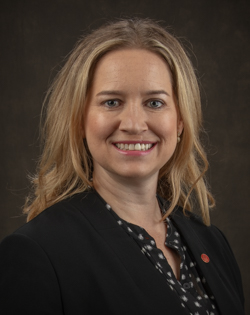 Amanda L. Trabue returned to the Hill in June 2019 as the Vice President for Philanthropy & Alumni Engagement.

Most recently, she served as the Associate Dean for Development and Alumni Relations for Peabody College of Education and Human Development at Vanderbilt University. In this role, she closely collaborated with the Dean to execute a strategic vision of philanthropy and engagement from alumni, parents, and friends of the institution. She was also charged with managing a staff of professional colleagues raising major and annual support, devising effective communications, overseeing annual donor events, and coordinating prospect development for the team. She spent five years as Director of Development for Peabody College prior to this role.

She also previously served as a Regional Director of Development at Washington University in St. Louis. During this time, she oversaw the alumni and development efforts in four metropolitan cities while securing financial resources for all undergraduate, graduate, and professional programs of the university. She was also responsible for overseeing two regional volunteer boards and planning strategic philanthropic events in assigned cities.

Amanda’s career in higher education began at Western Kentucky University where she was a student caller and manager for four years in the Phonathon program. After graduation, she started as a Coordinator, then Assistant Director of Alumni Relations and Annual Giving, responsible for the Phonathon program, faculty/staff campaign, senior class challenge, alumni chapters, and reunion programming. Before departing WKU, Amanda spent three years as the Director of Development for the Gordon Ford College of Business.

A two-time WKU alumna, Amanda received a Bachelor of Science in Marketing in 2002 and a Master of Business Administration in 2004.