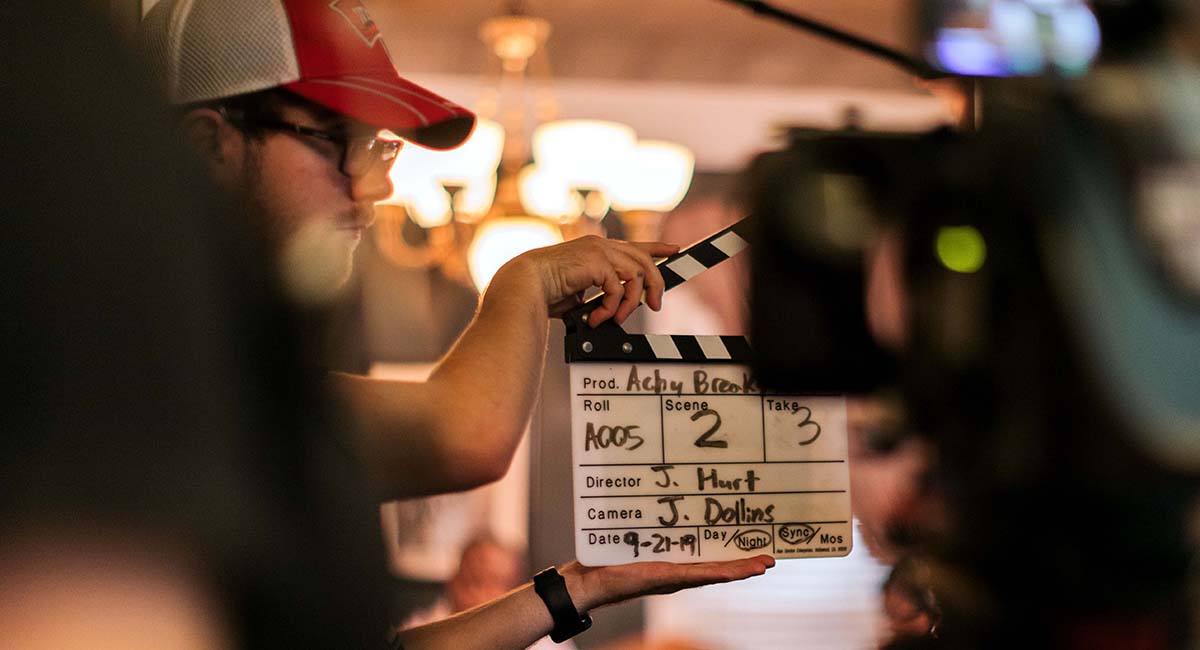 The BFA in Film Production is an immersive, pre-professional major which gives students numerous opportunities to make films in a conservatory environment.

Best for students pursuing a career in the film/television industry

The BA in Film is a flexible liberal arts major giving students a breadth of knowledge through film electives and minor/double major options.

Choose between our immersive, pre-professional BFA in Film Production or our flexible liberal arts BA in Film. Whatever your goals, we have a major to suit your needs. Students enroll in film courses starting freshman year.

BFA in Film Production students will rotate through “below-the-line” (technical) and “above-the-line” (creative) roles on two short film production cycles, leading to a final thesis film cycle where seniors choose an area of emphasis (directing, cinematography, producing, production design, editing, sound). By the time of their graduation, every BFA in Film Production student will be ready to enter the workplace with nearly 30 student film credits for their resumé.

Students applying for the BFA in Film Production must take 12 hours of Film core curriculum their first year (FILM 100, 201, 202, 250) and submit to a portfolio review during their second semester seeking admission. Twenty-four students per academic year will be selected for admission into the program based on the quality of their creative portfolio, their professionalism in class and on set, and their scholastic work.

The BFA in Film Production requires 81 semester hours. No course with a grade of “D” or below may be counted toward this major or fulfill prerequisite requirements for any major in the School of Media. After admission, students must follow a prescribed class schedule to ensure completion of the program in four years (including the first year of core courses), as outlined in the four-year plan.

In addition to a portfolio review, students applying for the BFA in Film Production must meet the following academic requirements:

Students who are not selected for the BFA in Film Production or opt-out of the portfolio review process will have the option of pursuing the BA in Film if they meet the BA in Film’s admission requirements.

The BA in Film provides undergraduates a strong foundation in both film production and film studies. This combination allows students to gain the practical skills to succeed on a film set in both “below the line” and “above the line” roles, to experience the mechanics of film production in industry and independent settings, and to develop facility in critical and analytical thinking through the study of global film culture, history and aesthetics.

The BA in Film requires 36 semester hours. No course with a grade of “D” or below may be counted toward this major or fulfill prerequisite requirements for any major in the School of Media. One-half of the hours in the Film major must be at the 300- or 400-level.

In addition to meeting institutional requirements for graduation, the Film major must have a minor or second major that is outside of both the School of Media and the Film Studies minor and is approved by the major faculty advisor. Students may not select a minor from those offered within the School unless taken as a second minor.

Prospective majors may take no more than 12 hours in the major before admission. Students must meet the following requirements before they can be admitted:

Students not meeting the above admission requirements will not be admitted to the Film major and cannot register for any additional courses in the major.

(courses may have prerequisites)