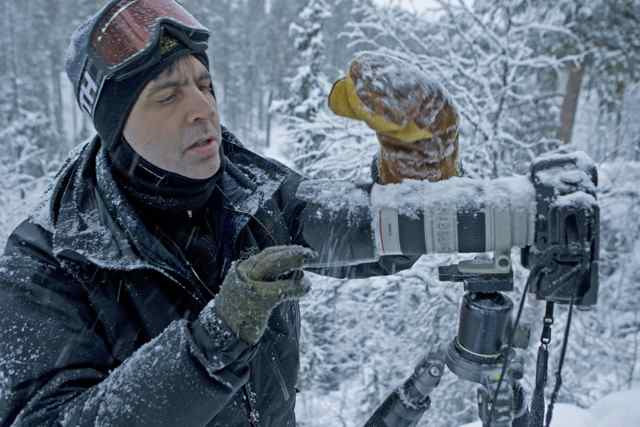 Essick will offer a perspective on the importance of environmental journalism as well as background details on the images he has taken while on assignment for National Geographic magazine, said Loup Langton, director of the School.

In addition to the lecture, two of Essick's photography exhibits are now on display in MMTH and will be available through Friday, March 21. "Our Beautiful, Fragile World," the images to be included in his February lecture, is located in the MMTH atrium. The exhibit documents contemporary environmental issues, such as climate change and nuclear waste. "Ansel Adams Wilderness," located in the MMTH gallery, is Essick's tribute to Ansel Adams and the craggy Sierra Nevada wilderness named in Adams' honor.

"Through the generous gift of the John B. Gaines family, WKU has benefitted from a decade of exceptional guest lecturers who have shared their numerous professional experiences with our students," said David Lee, dean of WKU's Potter College of Arts and Letters. "Peter Essick and his contributions to environmental journalism will certainly continue that strong tradition."

Recently named one of the 40 most influential nature photographers in the world by Outdoor Photography, Essick (peteressick.com) has photographed natural areas from around the world, portraying both the human impact of development as well as the enduring power of the land through his photographs.

"Having known Peter for almost 30 years, I'm certain that his presentation on visually documenting a host of global environmental developments will fascinate and stimulate thinking among students, faculty and guests." said Langton. "These are issues important to all of us."

During the past 25 years, Essick's contributions to National Geographic magazine have focused on a variety of environmental issues, including inner Japan, the American wilderness, the carbon cycle, global warming, and global freshwater. Recent stories include a June 2010 cover story on Greenland, "The Ansel Adams Wilderness" in October 2011, and "Fertilizing the World" in May 2013.

About the John B. Gaines Family Lecture Series

With having provided content to National Geographic in the area of nature photography, Peter Essick takes an environmental approach to his work that shows the effects of humanity on the world around us. He brings attention to many problematic issues in our environment including climate change and freshwater, by illustrating these troublesome situations for audiences to see.

Essick holds degrees from the University of Southern California and the University of Missouri, and his impactful photography can be seen in his book Our Beautiful, Fragile World, where he displays his work of nature over his years of being in the field.

Outdoor Photography Magazine took notice of Essick’s work and awarded him by titling him as one of the 40 most influential nature photographers in the world.

Student photojournalists at WKU are discussing the impact of the work done by the lecturer, Peter Essick, and why he excels at what he does.

Essick has completed some photography work along the similar path of Ansel Adams, and the use of Adams as a starting point along with putting his own personal spin on the project is something WKU photojournalist Justin Philalack said is notable of Essick's work.

"I really enjoy his work in the sense that it really takes us to different dimensions," Philalack said. "I think that's what makes him, just that drive, that passion, and I think that's very inspiring."

Justin Gilliland, also a photojournalist at WKU, said Essick's work is essential in that it helps illustrate what is happening in the world around us in a more efficient way than simply trying to grasp it through text.

"He's been able to go out there and see it and display it for us," Gilliland said. "It's really a bigger impact than what you could just read."

Gilliland said that what makes Essick a top photographer is his ability to craft what he sees into something more visible to the untrained eye. He said by doing that, Essick helps to make the situations around us seem more real.

"I think being able to make beautiful pictures from the environment and get a message to people without having that really robust, human emotion," Gilliland said. "I think it's a tough thing to do."

WKU photojournalist Cassidy Johnson agreed in Essick's ability to convey the larger picture of our surroundings throughout the world. She said his photos show all the events proceeding around us, but more importantly show what is necessary; what is happening to the environment.

"He shows people how beautiful our environment is but also what we're doing to it that is hurting it," Johnson said.

Through Essick's work with the environment and by taking photographs of the actual world we live in, his impact can be seen by those who have studied his pictures.

"He is expressing reality and what people really need to see," Gilliland said. "Which is something beyond who he is, and it makes it a little more universal."

“I see my work as a hybrid of landscape photography, outdoor work, and traditional journalism.”

Peter Essick’s book Our Beautiful Fragile World entails a wide variety of photographs ranging from nature photography to photojournalistic pieces. Every photograph portrayed in the book has been taken during different times of his career; however, all of them portray significant global issues, such as climate changes and fresh water supply.

“I haven’t really planned it that way, but it’s kind of a flipside.”

Recently named one of the 40 most influential nature photographers in the world, Essick likes to play with opposites. After working on “nature disturbed” stories, such as the photo coverage “Half Life: The Lethal Legacy of America’s Nuclear Waste, he suddenly changes approach and focuses on “nature undisturbed” photographs – mountains, flowers, underwater and many more.

“You have to look at the long term data.”

The National Geographic assignment about climate change was the kind of the experience that is not being offered every day, the photographer recalls. He shot in about 75 countries, capturing the main causes and consequences of the climate change. The coverage was published in The National Geographic in 2004. To capture moments and places he did, Essick said he had to believe in global warming.

“I was inspired by Ansel Adams and landscape photography.”

Ansel Adams work is a source of influence Essick decided to pay a tribute to. In his book, "The Ansel Adams Wilderness," Essick honored Adams’ photography by creating similar images, adding his own, unique spin.

“What you do as a photographer is you have to look for situations where people were sort of at the edge.”

Every story Essick works on is about a specific and significant topic. Whether it is capturing the nature within a particular season, pinpointing a global issue or just simply depicting beauty of the planet Earth, he often finds himself in extreme situations, such as underwater, in the middle of a wildfire, or in severe cold and heat.

“It attracts a lot of single men, these jobs. It’s cold in winter, you work 12 hours a day, not a very stimulating job.”

Essick is one of the best when it comes down to shooting nature. However, he is as good at shooting journalistic pieces. One such photo story included pictures of drug dealers, prostitutes and homeless who are all related to mining jobs in Vancouver.

“With climate change, the worst is yet to come, unfortunately.”

Currently, the photographer is working on three new assignments related to national disasters that could easily become global. The first he mentioned at the lecture was the area around the Mt. Rushmore which is infested by beetles that spread rapidly. People start wildfires to fight them, Essick said. However, it’s making the problem even worse.

At the conclusion of the lecture, Essick took time to answer some of the questions students were interested in. As some of the best qualities of a photographer, he named “clear eyes”, “strong heart” and suggested to not assume anything.