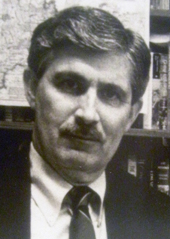 “Cementing the Entente, the Balmoral Conversions,” 1968

Written over 1600 abstracts of articles in numerous publications