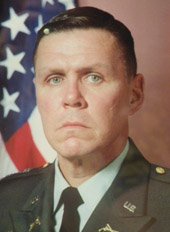 Colonel (Retired) Robert Taylor graduated from Western Kentucky University, with a Bachelor of Arts degree in Political Science in 1966 and obtained his Master of Arts degree in History in January 1968. He was commissioned as a second lieutenant in Military Intelligence and was detailed for an initial assignment as an Armor officer. Subsequent to his commissioning and following the Armor Officer Basic course at Fort Knox, Kentucky he graduated from the Ranger Course at Fort Benning, Georgia. In November 1969 he attended the Intelligence Officers Basic Course at Fort Holabird, Maryland, en route to the Republic of Vietnam.

Colonel Taylor commanded at the company level four times from 1968 through 1977 in Armor and Military Police Units. In July 1979 he was selected for attendance at the Command and General Staff College, Fort Leavenworth, Kansas. Upon completion of the Command and General Staff Course he was assigned to Headquarters, United States Army Europe in the Office of the Provost Marshal as a Plans Officer. In January 1982 he was selected as Aide-de-Camp to the Deputy Commander in Chief, Untied States Army Europe and Seventh Army. On 7 July 1983 he assumed command of the 385th Military Police Battalion in Kornwestheim, Germany.

In July of 1985, he was assigned to the Pentagon in the Organization of the Joint Chiefs of Staff, Plans and Policy Directorate, Strategy Division as a strategic planner. In August 1986, he was selected for attendance at the National War College, in Washington, D.C. Following competition of the War College, he was assigned to Headquarters, Department of the Army, Office of the Deputy Chief of Staff for Operations and Plans. Colonel Taylor served as commander, 2nd Region U.S. Army Criminal Investigation Command and subsequently as Provost Marshal, U.S. Army Europe

In July of 1995 he was assigned as Director, Military Strategy, Department of National Security and Strategy, U.S. Army War College at Carlisle Barracks, Pennsylvania. In May 1997 he retired from active duty. He was recalled as a civilian faculty member by the Army War College in October 1999. He continues to serve the Army and Nation as Editor in Chief of the Army’s professional journal, Parameters.

Colonel Taylor has been married to the former Linda McCain of Hopkinsville, Kentucky for more than 40 years. They have three adult daughters and two grandchildren.