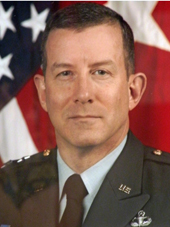 MG Theodore C. Nicholas received his commission in the Military Intelligence Branch in 1978 through the ROTC program at Western Kentucky University. He currently serves as the Director, Defense HUMINT and Counterintelligence Center at the Defense Intelligence Agency (DIA).

MG Nicholas holds a Bachelor of Arts Degree in Government from Western Kentucky University and a Master of Science Degree in Administration from Central Michigan University. His military education includes the Military Intelligence Officer’s Basic and Advanced Courses, the Tactical Surveillance Officer’s Course, the Defense Sensor Interpretation and Training Program, the US Army Command and General Staff College and the Air War College.

MG Nicholas is married to the former Jennifer Miller of Fayetteville, North Carolina. The Nicholas’s have a daughter, Amanda, and a son, Michael.