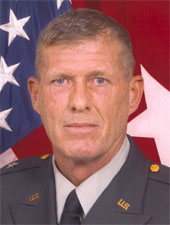 BG Alan Grice graduated from Western Kentucky University in 1976 with a Bachelor of Science Degree in History and received his commission in the United States Army, Adjutant General Corps, through the Army Reserve Officers’ Training Corps. His classmates describe him as the strong, silent type who leads by example and has the innate intelligence and intuition to get the best out of those around him, whether he is in a leadership position or not. Attainment of the rank of Brigadier General is an accomplishment in and of itself but to do so in a branch as small as the Adjutant General Corps further attests to the leadership and exceptional service of BG Grice.

BG Grice graduated from the Adjutant General Officer Basic and Advanced Courses. He is also a graduate of the US Army Command and Staff College and the US Army War College. He earned a Masters of Science Degree in Strategic Studies.

After more than 32 years of service to the Nation, BG Grice retired from the US Army in January 2009. He currently serves as a Site Manager/Consultant for Dynamics Research Corporation in Radcliff, Kentucky.

BG Grice and his wife, Cynthia have two sons and two daughters.