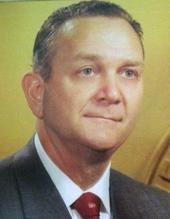 Dr. Dero G. Downing, the fourth president of Western Kentucky University, was born September 10, 1921, in Fountain Run, Kentucky. At an early age he moved with his family to Horse Cave and graduated fro Horse Cave High School in 1939. In high school he was an excellent student, president of the senior class, and a star member of the basketball team.

Dr. Downing continued a successful academic career at Western, receiving his undergraduate degree in mathematics in 1943. He was a prominent student leader during his undergraduate career, serving as president of the senior class and being elected to “Who’s Who in American Colleges and Universities.”

He was also a star member of some of the late Coach E.A. Diddle’s finest basketball teams, including the first Western team to participate in the National Invitational Tournament in New York’s Madison Square Garden.

After graduation, Dr. Downing joined the U.S. Navy as an ensign and served as an officer on a ship carrying troops and supplies in the first wave to hit the beaches at Normandy on D-Day in June 1944. He was engaged in naval activity across the English Channel between England and France until the end of World War II. In late 1945 he was released from active service with the rank of lieutenant.

In 1946 he returned to Western as a mathematics teacher and basketball coach at College High School, the high school division of Western’s Training School and completed his Master of Arts degree at Western in 1947. He gave up coaching in 1950 to devote full time to teaching mathematics and in 1956 was named director of the training school.

Dr. Downing received his Ed. S. degree in 1958 from George Peabody College for Teachers in Nashville. He was named registrar for the university in 1959, director of admissions in 1962, and served as dean of business affairs before being named vice president for administrative affairs in 1965.

In 1969, Dr. Downing became Western’s fourth president, a position he held until he resigned in 1979, being named president emeritus. From there, he became president of the college Heights Foundation where he continues to serve as Chairman of the Board.

He is married to the former Harriet Elizabeth Yarnell. Each of their five children are graduates of Western Kentucky University as are 5 of their 14 grandchildren.