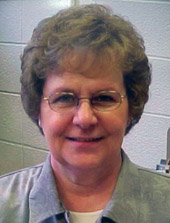 Connie Colter began her career in the Military Science Department of Western Kentucky University as the departmental secretary for the university is December 1967. Two years later, in January 1970, she was hired as the GS-04 Military Personnel Clerk.

Her duties in the Battalion include the standard Administrative Technician job description. Over the years these have changed during short periods when there were either an Admin Sergeant or another civilian assigned. For the past 12 years, she has been solely responsible for all cadet and cadre administrative requirements.

With the completion of the spring semester 2002, the WKU ROTC program has commissioned 709 Second Lieutenants since she began working in the Battalion. She maintains an alumni database of approximately 1000 former cadets who have been in the ROTC program during her 34 years. Connie is the link that bonds Hilltoppers past, present and future.

Connie says the real joy of being an Admin Tech is the cadets. Getting to know them, see them reach their goals of a degree and a commission, then hearing their “war stories” when they are Lieutenants, Captains, etc, is what keeps her going.

She remembers the day in 1968 when the First Lieutenant (P) John M. Keane reported for duty as an Assistant Professor of Military Science. Since she had just learned all the three letter ranks, the 1LT (P) was confusing! This individual, along with many others, have moved on to distinguished military and civilian careers. She takes great pride in following the careers of “her” cadets through daily emails, phone calls, and visits.

Along with the cadets and alumni that give her a profound sense of purpose in her work and is the continuing nature of the college atmosphere…each school year there is another group of new students. When the new four-year scholarship winners and their parents visit and the parents as when she plans to retire, then insist…four more years…it makes the long hard days all worth while!