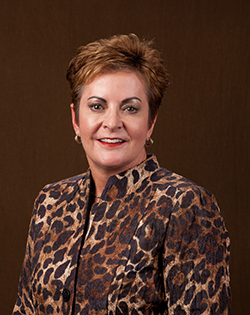 Julie A. Harris Hinson is President and CEO of Advanced Lifeline Services, Inc. (ALS) headquartered in Louisville, KY. She has been with the Company for 27 years starting as the Director of Marketing in 1989. In 2005, Julie was named President by the owners of the Company. In 2010, the company became 100% employee owned and she was named President and CEO of the Advanced Lifeline Services, Inc.  ESOP (Employee Stock Ownership Plan).

Advanced Lifeline Services is the leading provider of ventilator care services to long term care facilities in the US. There are twelve states that have Medicaid exceptional care rates for the care of ventilator and trach dependent patients. ALS has 16 locations in 7 of those states and is in a structured growth mode.

A native of Owensboro, KY, Julie earned a B.A. in Public Relations, minoring in Business in 1990. She also claims Glasgow and Bowling Green as secondary hometowns because of family connections and the influences each have had in formative periods of her life.

Julie’s contributions to WKU are abundant.  She is Past-president of the Greater Louisville Alumni Chapter and Past-president of the National Alumni Association Board of Directors.  Julie is the Chair of the Lee Robertson/Gary Sundmacker Golf Scramble, benefitting the chapter’s scholarship fund.  Her commitments also include service as a founding member of the WKU Sisterhood, where she is currently chair-elect, leadership on the WKU Foundation Board where she is serving her second term, and advisor to the College of Health and Human Services Advisory Council. During 2015 Homecoming’s Summit Awards, Julie was named the WKU Alumna of the Year. She was also inducted into the CHHS Hall of Fame in April 2016. Julie received the 2018 Volunteer of the Year for the WKU Sisterhood, and she is a Distinguised Service Award recipient. She was a member of the 2016 – 2017 Presidential Search Committee and is a Red Towel member of the Hilltopper Athletic Fund. Julie and her husband, Mike, are members of the Cherry Society at the Cornerstone Level.

Julie is a Life Loyal member of Alpha Omicron Pi Sorority. She also was active in the 50th Anniversary Committee celebrating 50 years of AOII/Alpha Chi on WKU’s campus.

She brings guidance to several organizations in Louisville, such as The Fillies Inc., The Woman’s Club of Louisville, the Kentucky Federation of Republican Women, and the Metropolitan Republican Women’s Club. She is also a member of the WKU Foundation Board; she is serving her second term.

Julie and Mike live in Prospect, KY, with their 3 four-legged children.