How old is the Earth? Our ancestors tried to answer that in very different ways than we do now. Explore these methods, and why the answer kept changing. Finally, learn why we look to rocks--even from the Moon--to answer the question.

“Celebrations for a Long Winter's Night”

The long cold winter nights of December are well suited for celebrations. This festive show illuminates the meaning of the winter solstice, and shares some history behind our holiday customs. Photo: Kevin Willis (WKYU)

Learn how and why the Sun, the Moon, and the stars appear to move across the sky each day. Explore the difference between how they appear to move from Kentucky and how they move from the Equator or the North Pole!

The James Webb Space Telescope will see the first galaxies that ever formed. Learn how we are able to see back in time, and also how Webb will be crucial to helping us discover whether there is life elsewhere in the universe.

The Hubble Space Telescope was launched thirty years ago, on April 24th, 1990. Enjoy beautiful images captured by HST with no narration and a specially composed soundtrack inspired by HST’s legacy. Questions about HST, its images, and astronomy and astrophysics will be answered at the conclusion of each show.
Hardin Planetarium has worked hard to create an environment safe for everyone. Properly worn masks and appropriate distancing are required while in the planetarium.

We learn about the cosmos by analyzing the light that shines across space, but visible light is only a tiny portion of the entire electromagnetic spectrum. Only recently have we invented the kinds of telescopes needed to see the rest of the universe: infrared, radio, ultraviolet, x-rays, and gamma-rays.

“Lives of the Stars”

A highly interactive experience where you will point to a star in the sky, we we will all learn its name, it's distance, and more. Through this we will explore the life cycles of stars: how they form, what they do, and how they end.

The search for life beyond Earth leads us to the surprisingly diverse array of moons in our very own solar system. What places in a solar system are likely locations for life as we understand it?

“Motions in the Sky”

Why does the Sun rise and set? How does the path change throughout the months? How does the Moon move through the sky? Where are the other planets in the sky?

A film viewing the universe through music and mathematics, showing off the sound system provided to us by the WKU Sisterhood.

A spectacular up-close look at our Sun and how it affects our world. And because the Sun is our nearest star, we learn a lot about stars by studying it.

NASA’s Perseverance Rover will reach Mars on 18 February 2021, to begin its search for signs of ancient microbial life, and characterizing environmental conditions that could affect future astronauts living and working on Mars. Perseverance will be only the fifth rover to attempt landing on Mars – when less than 50% of the missions ever sent to Mars by any space agency have been successful.

“Phantom of the Universe”

Follow protons through CERN’s Large Hadron Collider, and descend a mile beneath the ground searching for dark matter. Evidently it makes up 85% of the total mass of the universe, yet it has so far been detected only by its gravitational effects. Film narrated by Tilda Swinton.

“PlanetQuest: Discovering Worlds Around Other Stars”

The first planet around another star was discovered in 1992, and since then we've discovered many more. Learn how we discover planets, and what kinds of planets we tend to find. How do we know which planets might have life, and are any close to us? And see real photos of planets previously only imagined.

Explore the young age of Saturn's rings in context of our lives, the formation of our Solar System, and the birth of our Universe to understand what "young" actually means from a cosmic perspective.

Where we stand in the cosmos: a perspective. Learn how everything in the universe spins and orbits, and how the universe is, indeed, expanding.

Find your way around night skies in this highly interactive experience. Examine star patterns in the current sky and create your own stories--as your ancestors did--to help remember these patterns.

“When the Universe Was Young”

Explore why we believe we finally understand what the universe was like when it was young, and learn three tools we use to come to that conclusion.

The below shows are not available until the public health situation changes.

“First Steps on the Moon”

The challenges of traveling as far as the Moon were achieved in 1969, and we explore this in a film. We also learn--interactively--how to target a moving object, how far away the Moon really is, and how to time a landing. 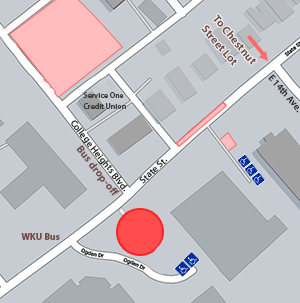 3) College Hill Lot, up College Heights Blvd. on the right

4) Chestnut Street North Lot, at the corner of Chestnut and 14th Ave, two blocks from the Planetarium

Wheelchair Accessibility: A ramp from State St. provides access to the building's main floor. The below lots are only available on weekends or after 4:30 PM.

1) Two spots in a tiny lot behind the building, at the end of a driveway from State St. That lot is lower than the building, so it is an uphill climb.

2) Three spots in the lot between Ogden College Hall and Kelly Thompson Hall.

3) The large parking lots on top of College Heights Blvd. The path from there is down hill.

Many of our guests prefer to be notified of our events. You can sign up below or at the planetarium.