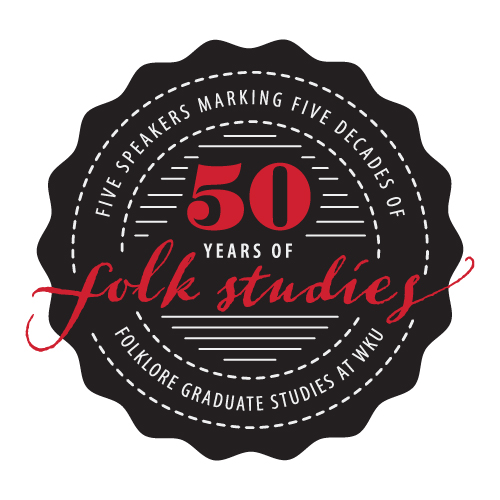 Over the coming year, the Department of Folk Studies and Anthropology will celebrate 50 years of graduate study in folklore at WKU. This golden anniversary celebration will include a series of five speakers marking five decades of folklore graduate studies at WKU. Speakers will include both alumni and former faculty.

Folklore studies began at WKU in 1917 when Gordon Wilson called for the collection of folklore of the region. In the decades to follow, folklore faculty members were hired, and classes were offered in the department of English, with many cross-listed in anthropology. By 1972, folklore faculty included Lynwood Montell and Camilla Collins and others, the Center for Intercultural Studies was established, headed by Montell, and the MA program was created. The first degree in Folk Studies was granted in 1973.*

The 50th anniversary speaker series will kick off on September 15th with David Puglia who received his MA in Folk Studies at WKU in 2010. Dr. Puglia is now Associate Professor at Bronx Community College, and his most recent book, North American Monsters: A Contemporary Legend Casebook (2022), inspires his talk, entitled "Legendary Monsters, Creatures, and Cryptids: A Folklorist's Introduction to Strange and Mysterious Beings."

All talks are free and open to the public and will take place at 5:30pm in the Western Room at the Kentucky Museum.  For more information contact Ann K. Ferrell, Folk Studies Director, (270) 745-5896, ann.ferrell@wku.edu.

* More on the history of folklore studies at WKU can be found in Michael Ann Williams’ chapter in Folklore in the United States: An Institutional History (2020).