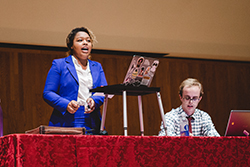 The WKU/Alumni Fall Tournament rolls together an invite-only L-D round robin, an Open L-D tournament, and two IE tournaments into one weekend. We offer novice divisions in L-D debate, and top novice awards in IEs. The 2021 overall team sweepstakes champion for individual events and debate was Truman State University. The overall individual events champion was the University of Alabama. 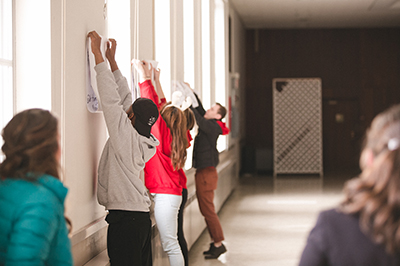 This year we will be hosting a virtual asynchronous tournament, held December 6-11, 2021

A large tournament, averaging 25 schools, with all senior KHSSL individual evewnts events, in a single day. Semifinals possible in a few events.

Videos of these showcases will be released to the team's Youtube channel after the competition year, around May.

To open the first alumni-lead team practice weekend of the season the team will host a small showcase of performances in the Faculty House, free of charge.

WKU Forensics is coming out with the second annual QUEER AND HERE: A night of LGBTQIA+ Performance. The second showcase for 2019-20, this free show will include performances from the WKU Forensic Team, a presentation from the Queer Student Union, and likely one other lesson. We would love to have you join us for this free performance-centered event.

The original minority voice showcase, the 2020 BEE is a free public showcase of dance and choir, and performances of poetry, prose, and public speaking from the WKU Forensic Team, creating Black History. The least of featured performers will be made available closer to the event.

This public showcase on recovering from sexual trauma features performances by members of the WKU Forensic Team and a discussion from Hope Harbor, Inc. Please help us raise funds by paying what you can (~$2-5) or providing hygiene products like feminine pads or socks; money will go to HH, and items to Barren River Area Safe Space, Inc.

In the weeks leading up to the national tournaments, the team brings together several of its alumni and hosts a coaching weekend. That weekend is begun with this showcase.

To enter one of our tournaments, simply click on the associated link. This will forward you to the Speechwire page for that tournament, where you will find the tournament information and online registration. You *must* register for the tournament online.